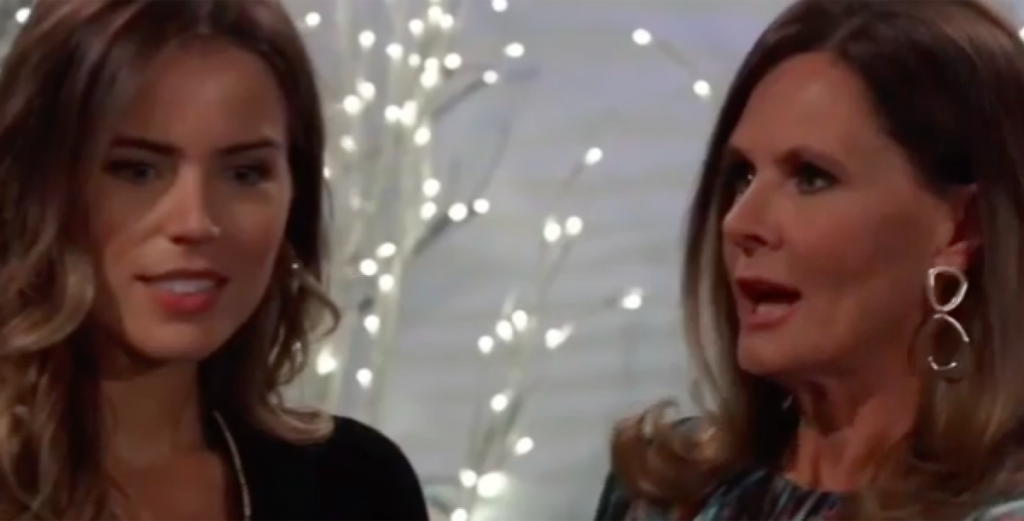 Nina Reeves, (Cynthia Watros) Maxie Jones, (Kirsten Storms) and Lucy Coe (Lynn Herring) appear to be in the middle of a deal between Lucy’s rebooted company “Deception” and Crimson Magazine when all of a sudden Sasha Gilmore, (Sofia Mattsson) Lucy’s new “Face of Deception” bursts into the room and confronts Lucy!

Sasha is visibly angry as she lays into Lucy and tells her, “What you call moving forward, I call just stupid!” Perhaps Sasha doesn’t want Lucy making deals for her to appear in Crimson until Nina has had a little more time to heal up from the traumatic events of the past few months! Sasha still cares for her mother figure, if not her actual mother, very deeply!

At General Hospital, Elizabeth Baldwin (Rebecca Herbst) is blindsided when Nikolas Cassadine (Marcus Coloma) approaches her! Nikolas is hearing what is rapidly becoming the story of his life – or should that be his non-life – when Elizabeth emotionally asks him if he had ever thought about contacting anyone who loved him! Longtime General Hospital viewers will recall that Nikolas and Elizabeth had been very close for many years, since they were teenagers so she certainly won’t understand why he didn’t contact anyone to let them know he was alive and well, and she will probably really give him an earful about his not contacting his own son, Spencer Cassadine (Nicolas Bechtel)!

Also at General Hospital, Brad Cooper, (Parry Shen) continuing the conversation about Michael Corinthos (Chad Duell) hiring a nanny for Wiley Cooper-Jones (Erik and Theodore Olson) to help him out since he’s stretched so thin, tells Michael he has the perfect person to take care of Wiley, as Willow Tait (Katelyn MacMullen) is standing there with them. Willow would be the perfect person, but there is one catch – she works with the children who are in the hospital and tutors them so they won’t be so far behind in their studies, and that is about the same time frame that Brad works in the lab!

At Charlie’s Pub, Sonny Corinthos (Maurice Benard) continues his confrontation of Julian Jerome (William DeVry) that started in Thursday’s episode. Sonny had told Julian that he knew what he and Brad had talked about on the dock, and he will want an explanation of how he, Brad and Wiley would be connected to Nelle Benson (Chloe Lanier) whose name came up in the conversation, along with Michael’s. He tells Julian if he’s got something brewing, he’d better think twice!

Next thing on the agenda for Jason Morgan (Steve Burton) while he’s still at the Port Charles Police Department after talking to District Attorney Robert Scorpio (Tristan Rogers) about getting evidence against Peter August (Wes Ramsey) in exchange for fixing Sam McCall’s (Kelly Monaco) parole problem, is talking to Police Commissioner Jordan Ashford (Briana Nicole Henry) about the Corinthos Coffee truck hijacked from the warehouse. Jordan asks Jason if he thinks that he and Sonny might have made themselves an enemy; well, that could be a distinct possibility!