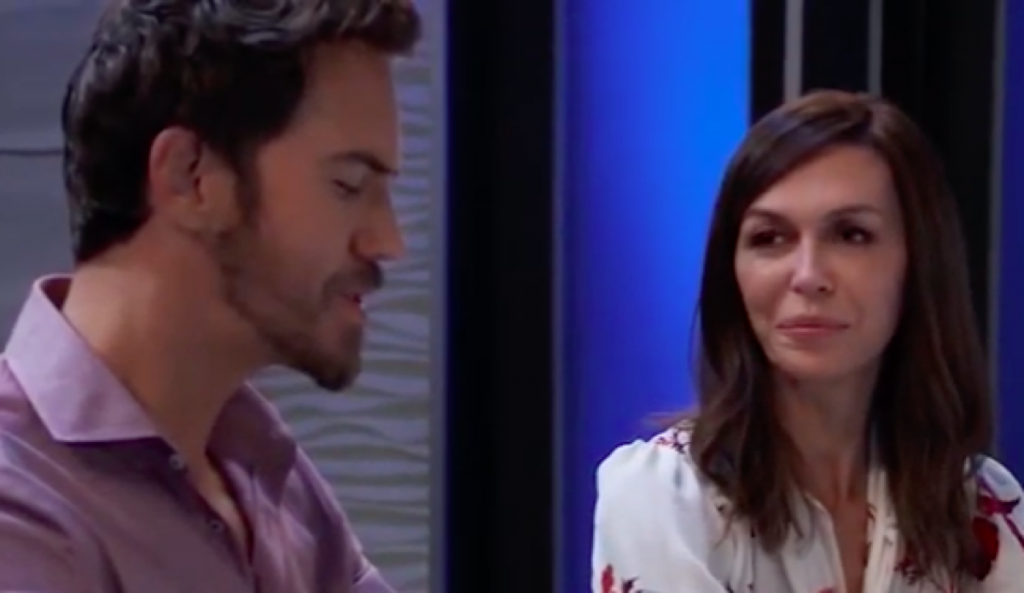 Welcome to your Thursday, January 9th General Hospital (GH) recap! We begin our day at Anna Devane’s (Finola Hughes) house where she is telling Hamilton Finn (Michael Easton) how worried she is about her son. She wonders if what Jason Morgan (Steve Burton) said about Peter August (Wes Ramsey) is really true.

At General Hospital (GH), Brad Cooper (Parry Shen) has returned to work and runs right into Michael Corinthos (Chad Duell) with his son Wiley. Brad asks if everything is okay and Michael says, not really.

At Crimson magazine, Nina Reeves (Cynthia Watros) questions Maxie Jones (Kirsten Storms) about the relevance of Giselle being on the cover. Maxie says she was trying to figure out how to run a magazine, as Jasper Jax (Ingo Rademacher) walks in.

At Charlie’s Pub, Julian Jerome (William Devry) is upset as he gets off the phone as his sister Ava Jerome (Maura West) approaches. She asks how Lucas is doing and he says there has been no change.

Ava tells him about the NYE drama, her near-death accident, and now the wedding to Prince Nikolas Cassadine (Marcus Coloma). Julian is worried that everyone has forgotten about Lucas and he wonders how Wiley is handling it.

In the Corinthos kitchen, Carly Corinthos (Laura Wright) asks to see the research that could help Mike. Her husband Sonny Corinthos (Maurice Bernard) explains he got the information from Gladys, as Carly wonders if it’s a long shot.

Sonny suddenly remembers he needs to run out and see Julian, which bothers Carly.

At the police station, Diane Miller (Carolyn Hennessy) arrives and asks Sam McCall (Kelly Monaco) and Jason Morgan (Steve Burton) what the latest update is. Robert Scorpio (Tristan Rogers) walks in and says he would like to hear their proposal.

Diane defends Jason and feels like they both need a new parole officer. Robert says Sam is a criminal and he just can’t help them.

Michael Corinthos (Chad Duell) tells Brad that Wiley has been fussy at daycare. He tells Brad he hasn’t been answering his phone and has been late picking him up from daycare.

Michael goes over to see his mom Carly and says he wants to get Wiley a nanny to help out Brad.

Jasper Jax (Ingo Rademacher) asks them for the budget numbers that Nina does not have, but Maxie has done them. Jax asks Nina how she is doing after the wedding debacle on NYE, she says shes worried about Charlotte.

Nina is very grateful to Maxie for doing the budget numbers as Jax tells her how nice it is to have her back at work.

Anna Devane (Finola Hughes) tells Finn that instead of helping Jason, she has been covering Peter’s tracks. Peter shows up at the house as Finn leaves, she says she has some questions for him.

Anna shows him some bank records from the hitman and explains the connection she found.

Jax and Finn meet up and he explains that Hayden was attacked on the pier which prompted her to leave town. Jax says he will do whatever he can to get her back home. Jason tells Robert that he has information on Peter, which could help get him arrested. Sonny runs into Ava and she explains that she is now the wife of Nikolas Cassadine. Sonny says she better be careful and Avery cannot get caught in the middle. Sonny goes into the bar and tells Julian he knows the secret he’s keeping with Brad……….flash to preview

Days of Our Lives Spoilers: Clyde Wants To Break Out With Prison – Will Ben Come Up With A New Scheme?