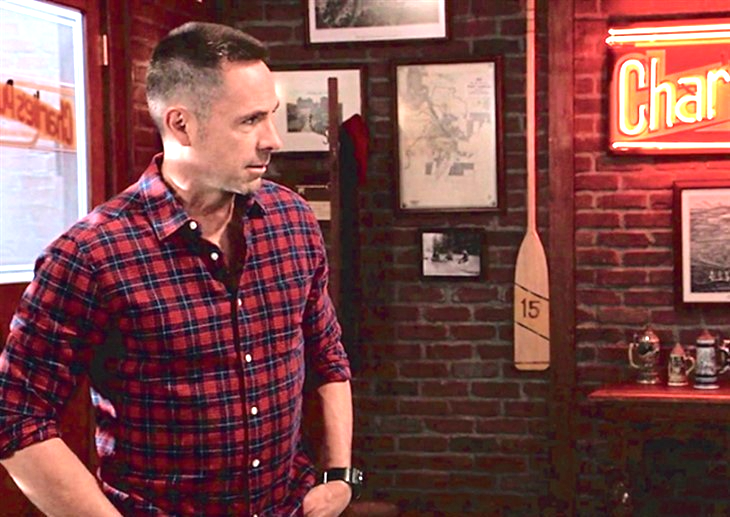 General Hospital (GH) spoilers tease Charlie’s Pub, and its owner, Julian Jerome (William DeVry) may both be gone from the Port Charles, New York landscape sooner rather than later. As General Hospital viewers know, Julian has been making more enemies lately. Could one of them have reached their limit, leading to Julian’s fiery exit? Let’s take a look at some possibilities for this scenario!

Julian is a widower, thanks to the death of Nelle Benson (Chloe Lanier). The two only got married because Nelle was blackmailing the bar owner with the information that Julian knew that Wiley Corinthos (Erik & Theo Olsen) was Michael Corinthos’ (Chad Duell) son long before the truth about the baby switch came out. But before Nelle died, she sent a letter to Ryan Chamberlain (Jon Lindstrom) detailing Julian’s involvement.

Ryan is in love with Julian’s sister, Ava Jerome (Maura West), and is GH spoilers show he’s blackmailing Ava to divorce her husband Nikolas Cassadine (Marcus Coloma). It may not even matter what Ava does. Ryan is about the least reliable person to have that letter. There is no guarantee that he won’t reveal the information to Sonny Corinthos (Maurice Bernard) regardless of what Ava does.

GH Spoilers – If Sonny Corinthos Finds Out What Julian Jerome Did

If Ryan sends Sonny the letter with the information that Julian knew about the baby switch, he’s likely to finally make good on his threat to take Julian out. Of course, Sonny won’t do anything himself. He will send his right-hand man, Jason Morgan (Steve Burton) to carry out his wishes. It’s possible Jason will set fire to Charlie’s Pub, with Julian inside. But this doesn’t seem like Jason’s style. A fire could harm innocent people, so that doesn’t seem like something Jason would do. But anything is possible.

Cyrus Renault (Jeff Kober) has recently approached Julian to sell Charlie’s to him. Up until now, General Hospital spoilers show Julian has refused the mobster’s request. But the more times Cyrus has to ask, the more threatening he becomes. In the most recent encounter between the two, Cyrus made a thinly veiled threat against Julian’s life. It seems likely that Cyrus feels that if he can’t have Charlie’s then no one will. It isn’t above Cyrus to torch the place, regardless of the threat it could pose to others besides Julian.

Will Ryan set events in motion that will lead to Julian’s death on General Hospital? Will Jason carry out a hit ordered by Sonny? Or will Cyrus decide to kill Julian and torch the pub? Anything can happen in Port Charles, so stay tuned to General Hospital, airing weekdays on ABC. And don’t forget to check back here regularly for all your General Hospital news, information, and spoilers.