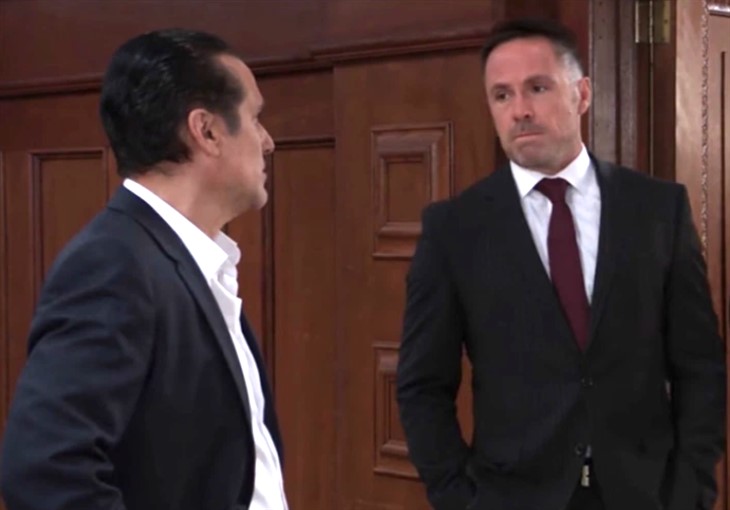 General Hospital Rumors suggest that William deVry is out at GH. Was Julian’s conversation with Alexis Davis (Nancy Lee Grahn) foreshadowing his General Hospital departure? In Port Charles Alexis was brutal in her assault against Julian, will those words be the last she hears from him? There are a few ways Julian could disappear but these are the most likely.

General Hospital’s Sonny Corinthos (Maurice Benard) could learn the truth about Julian and simply take him out. Sonny has already warned Julian what would happen if he found out he was involved in the baby switch coverup with Brad Cooper (Parry Shen). Will Ryan Chamberlain (Jon Lindstrom) forward Nelle Jerome’s (Chloe Lanier) letter to Sonny?

Could Ryan even call Sonny to Pentonville and tell him the truth himself? Ryan has warned Ava Jerome (Maura West) that he will send the letter if she doesn’t divorce Nikolas Cassadine (Marcus Coloma) will he send it whether she divorces Nik or not? Is there another copy out there that makes it’s way to Sonny? Could Sonny simply overhear Julian talking about it himself?

General Hospital’s Julian was in witness protection years ago. Julian was given the name Derek Wells and was never suppose to have revealed himself. Could Julian go back into witness protection and disappear only to turn up later with a new face? Would the program take Julian back since he’s already revealed himself once? Will Julian be forced to find another way to disappear? Will Nik help Julian escape so he and Ava can move on with their lives? Would Julian allow Nik to help him and let his sister be happy?

A Fire And A Fake Death

With rumors of a Port Charles fire, Julian could very easily disappear and be presumed dead. Cyrus Renault (Jeff Kober) has made no secret of the fact that he wants to buy Charlie’s. Julian has turned Cyrus down time and again. Cyrus recently threatened Julian by reminding him of the alibi he gave Julian in the Martin Gray (Michael E. Knight) attack. Does Cyrus have the mentality that Julian needs to be taught a lesson? Could Cyrus accidentally kill Julian? Is the fire a setup between Nik and Julian to fake his death and save his life?

Julian’s disappearing would certainly save him from both Sonny and Cyrus. Julian is estranged from everyone in his family except Ava. If Nik helps Julian then Ava would always have a connection to her brother. Will Julian survive or is this the end of the man who helped steal Michael Corinthos’ (Chad Duell), son?