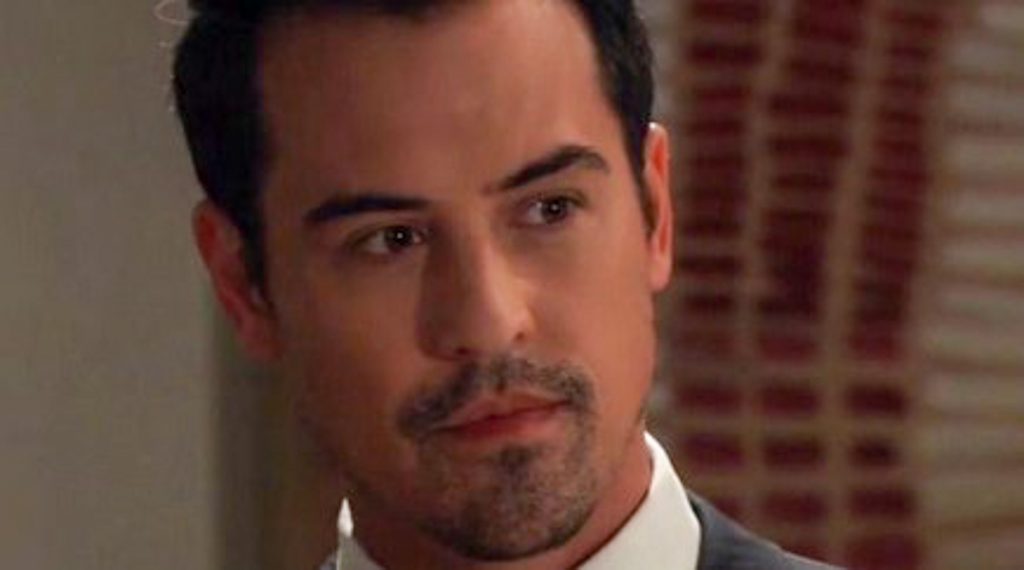 General Hospital spoilers tease that Elizabeth Baldwin (Rebecca Herbst) will be blindsided when Nikolas Cassadine (Marcus Coloma) shows up for a visit in an upcoming episode of GH!

Nikolas Cassadine (Marcus Coloma) will reveal himself as alive at the Cassadine wedding, but not everyone in Port Charles will be at that wedding, none of the Baldwin family, and no one else who would think to tell Elizabeth that he is alive before he shows up himself. Laura Collins (Genie Francis) might have, but she will be blindsided herself, not to mention probably pretty upset with her older son for letting her believe he was dead and mourning him for the past three and a half years!

It will totally slip her mind that Elizabeth might want to know the good news! Elizabeth will be totally blindsided when she answers the door to Nikolas, although once she gets past the shock, she may not be so surprised after all – after all, Jason Morgan (Steve Burton) was presumed dead for longer than Nikolas has!

Nikolas may be blindsided as well, seeing his old girlfriend Elizabeth married to Franco Baldwin (Roger Howarth), the former serial killer – which Elizabeth would stress the word “FORMER” to Nikolas. Or, maybe he won’t be so shocked, if he’s been keeping up with the happenings in Port Charles online! Either way it will be a pleasant surprise that will start out as a shock for Elizabeth! Elizabeth and Nikolas dated in the form of an affair in 2009, when she was dating Lucky Spencer (Jonathan Jackson) and he was involved with Rebecca Shaw (Natalia Livingston).

Rebecca and Lucky had dumped Nikolas and Elizabeth and gotten involved with each other, and Nikolas and Elizabeth shared a faked steamy kiss in front of them to make them jealous. However, it ignited something in both of them, after having been very close friends since they were teenagers and Nikolas had first come to Port Charles! Eventually, Nikolas lost interest in Rebecca, and Elizabeth had made up with Lucky and they were engaged, but they couldn’t get that kiss out of their minds and wound up having an affair!

Unfortunately, on the night they were going to end their affair, Lucky caught them with their pants down, literally! Then Elizabeth found herself pregnant with Aiden Spencer (Jason David) and there was a question whether he was Lucky’s or Nikolas’! In 2013, Nikolas again came to Elizabeth and told her he still loved her and wanted to resume their relationship. She was involved with AJ Quartermaine (Sean Kanan) – who had also been presumed dead but in his case his mother helped him fake his death – and Nikolas let her be involved with AJ, which didn’t work out, and at that time Nikolas got involved with Britt Westbourne (Kelly Thibaud).

General Hospital Spoilers: Has The Beginning Of The End Started For Valentin Cassadine? @celebratesoaps #gh #generalhospitalhttps://t.co/rInLmQn0Q8

Ironically, Nikolas is still legally Elizabeth’s brother-in-law, although when he and Hayden Barnes (Rebecca Budig) married she did not yet know that she and Elizabeth shared a birth father in Jeff Webber (Richard Dean Anderson). Nikolas “died” three months before she found that out. However, since they have been obviously in touch since Hayden could have told him about herself and Elizabeth being half-sisters.

Hayden has disappeared but Nikolas may actually know where she is, keeping her location a secret to keep her safe from the long reach of Valentin Cassadine (James Patrick Stuart). Perhaps this is the reason for his visit; not only to visit his close friend and ex-girlfriend, but to let her know news of Hayden!