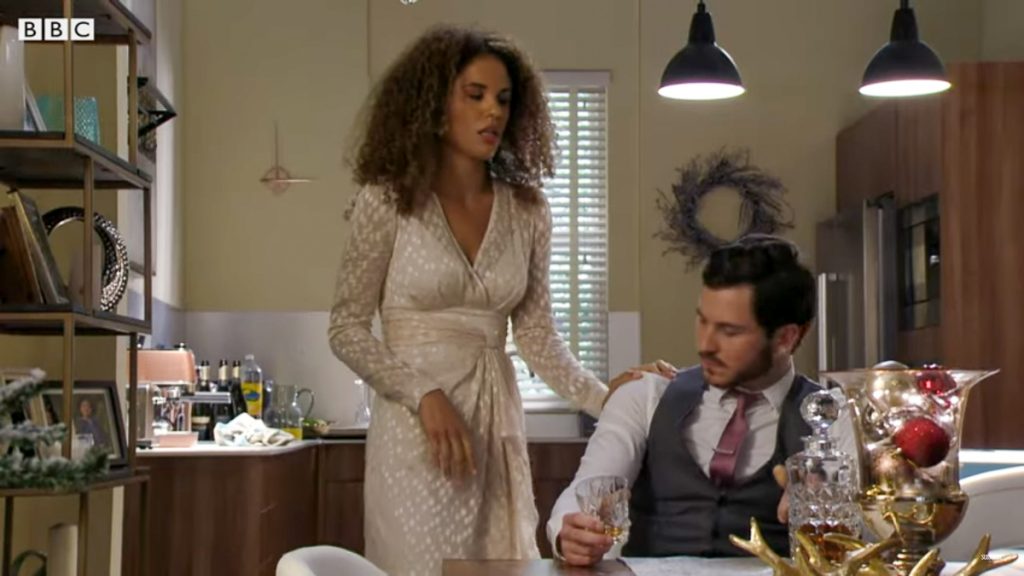 Eastenders spoilers confirm Gray Atkins (Toby-Alexander Smith) will go back to his old ways. For a short time, it seemed like there might be light at the end of the tunnel. He began going to counseling and Chantelle Atkins (Jessica Plummer) learned about his abusive childhood. However, expect some intense scenes in the next few weeks as he goes into a rage when she still isn’t pregnant again.

Gray has an abusive history with Chantelle, but viewers had some hope when he began going to counseling. There, Chantelle learned a bit about Gray’s father and the abuse he went through as a small child. It made her understand him a little more, but nothing justifies abuse no matter what. Unfortunately, it seems that the improvement would be short-lived.

Eastenders spoilers reveal that Chantelle had a bad feeling about the vow renewal and didn’t really want to go through with it. She put on an act for everyone and part of that was to not set off Gray. In fact, she even secretly sabotaged it. However, he ended up coming up with an alternative and they had the ceremony at home. Then he surprised her with a honeymoon.

Once they get home from their honeymoon, he will demand that Chantelle take a pregnancy test. It comes out negative, which doesn’t make him happy at all. He then orders her upstairs so he can try to get her pregnant again. This isn’t something she wants and is actually a form of abuse.

In a sneak peek photo, it is teased that he gets violent with Chantelle again. He grabs her arm very hard and it is hurting her. She’s trying to get away but either can’t or is frozen in fear. How is she going to protect herself and the kids from his rage? Just how bad will Gray get and could things possibly get even worse? Fans will have to keep watching the British soap opera to see how this storyline gets resolved and what happens to Gray and Chantelle.

Young and the Restless Spoilers: Phyllis Sees An Opportunity With Chance – Will Abby Lose At Love Again?