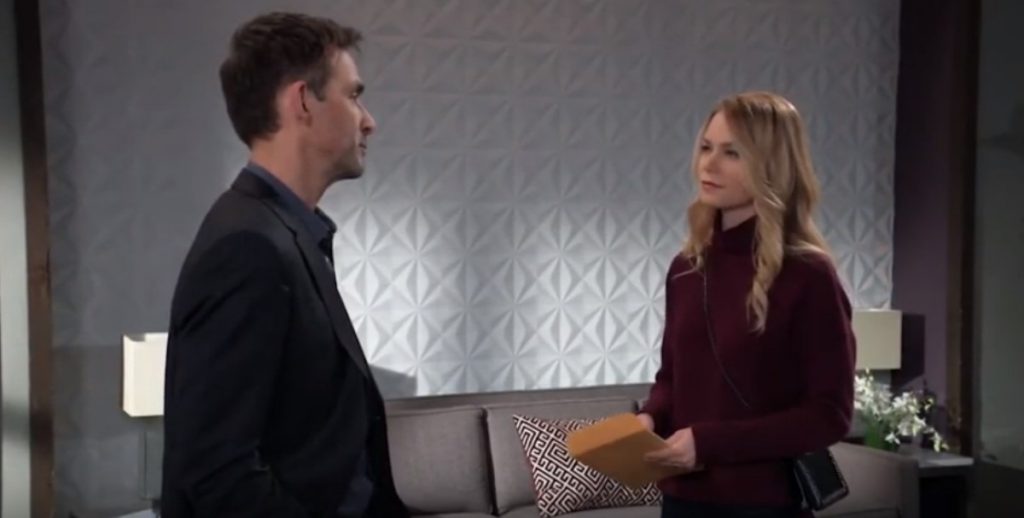 General Hospital spoilers tease that Nelle Benson Archer (Chloe Lanier) might have thought she could pull a bait and switch on Valentin Cassadine (James Patrick Stuart) and got the money for the stocks she sold him plus keep the stocks for a future cash cow at the same time, viewers may find out in a future episode of General Hospital!

General Hospital viewers will recall that Nelle used a disappearing ink pen when she was gaslighting Carly Corinthos (Laura Wright) several years ago. She had written a note supposedly from Morgan Corinthos (Bryan Craig) and left it on his tombstone in the Port Charles cemetery to make Carly think that Morgan was alive and trying to reach out to her!

She saw the note, which was on the back of a Noodle Buddha menu, but by the time she tried to show it to anyone, the writing had disappeared! However, it was found later on that if the paper became wet, the writing would reappear!

Would Valentin, a former mercenary who went to spy school not suspect disappearing ink could have been used, knowing the history of Nelle and her cons? After all, she worked for Nina Reeves (Cynthia Watros) and Valentin for a time, and when she was in Morocco with Crimson Magazine for a photoshoot, she was suspected of stealing a necklace that was being used for one of the shoots – but Valentin found the necklace and even though she slipped out of that accusation, she was fired shortly thereafter.

However, Valentin is going through some things – he just found out that he wasn’t a Cassadine after all and that Helena Cassadine (Constance Towers) was his mother, and that Nina has left him for Jasper Jacks (Ingo Rademacher)! He’s about as low and desperate and devastated as a man could be, and he may not be as on top of his game as he usually is!

Nelle pushed that transaction on the stocks pretty quickly and then wanted immediately to get out of the country, which Valentin complied with, getting fake passports made for herself and Wiley Cooper-Jones/Jonah Corinthos (Erik and Theodore Olson)!

There would be no doubt that Valentin would kill Nelle if he were to find out that she duped him by signing the ELQ stocks over to him with disappearing ink! For one thing, he would be kicking himself for being so unusually trusting, and for the other, he would be furious!

If she were on the road with Wiley/Jonah he would ensure first to get him away from her, therefore making himself a hero, and then he’d kill her – maybe he’d blow her up in a boat like he did Cassandra Pierce (Jessica Tuck)! NO ONE dupes Valentin Cassadine and gets away with it!