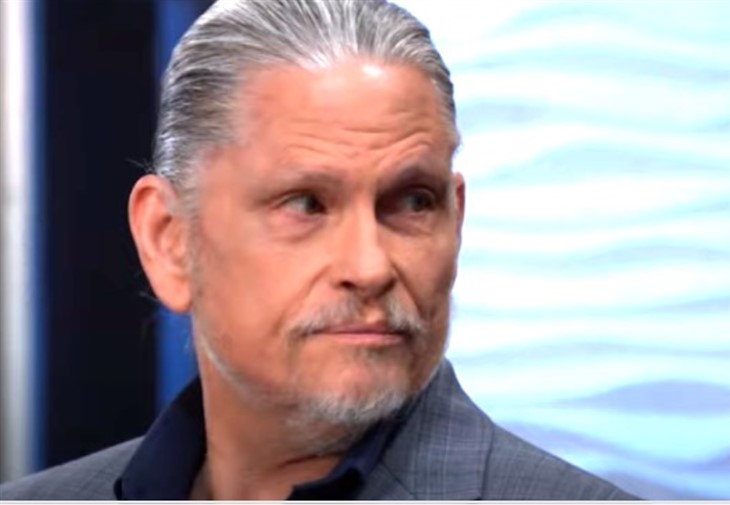 ABC General Hospital spoilers tease that Cyrus Renault (Jeff Kober) may want Charlie’s Pub for more reasons than using it as a front for drug-running. Could he be connected to Vincent Marino, the body buried in the basement?

General Hospital viewers will recall that there was a new DA in town a few years ago with an agenda against Sonny Corinthos (Maurice Benard). Her name was Margaux Dawson (Elizabeth Hendrickson). She blamed him for the death of her father, Vincent Marino (uncast character). Sonny had buried the body, but it was Joe Scully Sr. (Robert Miano) who carried out the hit. Vincent had been Scully’s attorney and this was Sonny’s first job for Scully. Later the storyline changed, and it was revealed that Sonny had actually carried out the hit.

His late father, Mike Corbin (Max Gail) had seen it and followed him to where he buried the body, which was in Croton, New York. He moved the body and entombed it in the wall of the basement of Charlie’s Pub, which is a close friend of Charlie when the pub was built! Margaux wasn’t just obsessed with taking Sonny and his organization down – she had a vendetta! Once Sonny learned that Mike had entombed the body in Charlie’s Pub he knew he had to do something! Sonny too tried to buy the pub from Julian Jerome (William DeVry) but he declined, just as he did with Cyrus.

The way Sonny got Margaux off his back was rather unique. It could be considered emotional blackmail. Sonny actually felt sorry for the young DA, but he had to hurt her. He had Sam McCall (Kelly Monaco) and Damian Spinelli, (Bradford Anderson) who was in town go to Margaux’s hometown. Sonny remembered Joe having a girlfriend named Jeanette Marino (Ely Pouget), and made a connection. Sam and Spinelli questioned Jeanette.

Later they broke into her house and found many love letters between her and Scully. The affair had gone on for years until Scully was killed. In one of them, she had requested that he put a hit on Vincent. Sonny confronted Margaux with the evidence that her mother had been cheating on her father with Scully for years and had ordered his murder! It broke Margaux, and she soon left town and left Sonny alone.

GH Spoilers – Could Cyrus Renault Have Also Been Involved In The Murder?

Perhaps Mike wasn’t the only one who saw the hit – maybe Cyrus was off in the shadows as a lookout! Then he could have hung around and seen Mike move the body and followed him! If that is what happened, Cyrus isn’t worried about the body as far as him being blamed for the murder. That’s not why he wants Charlie’s Pub. He wants leverage over Sonny so he can take over his territory! There are another factor and yet another person with an interest in both Sonny and Cyrus.

Longtime General Hospital viewers will recall that Marcus Taggert (Réal Andrews) also came to Port Charles with a vendetta! Marcus’ mentor as a child was Deke Woods (uncredited actor). Deke was a corrupt police officer in Bensonhurst, New York City where Sonny grew up. He was also Sonny’s stepfather. He knew Sonny was tied to Joe Scully, who killed Deke. Deke was also Taggert’s first police partner, as a rookie.

Taggert blamed Sonny for his mentor’s death for years and sought to take him down. Now Taggert, “playing dead” has pretty much given up his vendetta against Sonny. Both he and Sonny are now trying to take Cyrus down! Chances are, Cyrus, did have a connection to Scully, and Taggert and Sonny will find it out! Taggert won’t let Sonny take the fall for Marino’s death!