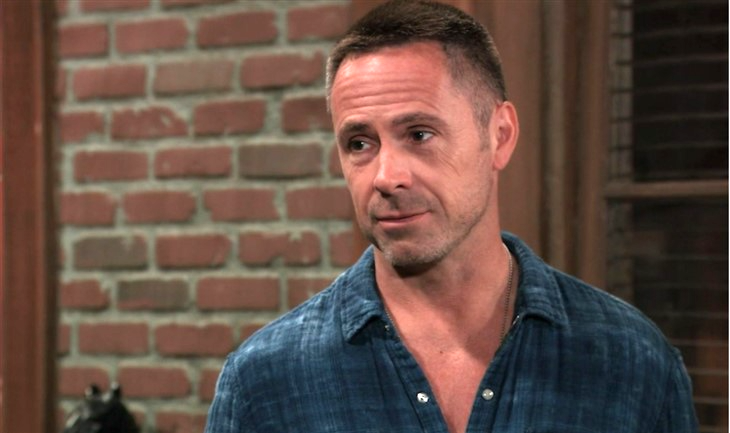 ABC General Hospital spoilers and rumors reveal Martin Gray (Michael E. Knight) will be attacked this week. Is Julian Jerome (William DeVry) behind the attack? Will Julian get Nelle Jerome’s (Chloe Lanier) letter before its contents are exposed to Sonny Corinthos (Maurice Benard)?

General Hospital’s Julian tried to talk Martin into helping him get an annulment. While they were talking, Martin gets a call that Nelle has been found dead. Martin is legally responsible to see that Nelle’s letter gets to it’s intended recipient since she never retained another lawyer. However, Julian thought he could talk Martin out of the letter. Now that Martin has refused, Julian knows his days are numbered. Will Julian resort to violence to keep Sonny from learning the truth?

General Hospital’s Julian knows that he has two choices. Julian can get that letter away from Martin, or he can face Sonny’s wrath when the truth comes out. Julian knew when he helped Brad Cooper (Parry Shen) cover the fact that Wiley Corinthos (Theo And Erik Olson) was the baby Brad had would get him killed. Julian helped to keep Michael Corinthos’ (Chad Duell) son away from him for months. Nelle used this information to blackmail Julian. Although Julian may not have killed Nelle, the letter is still set to be given to Sonny. Has Julian dawned his baby stealing mask again to attack Martin?

General Hospital Spoilers – Julian Jerome May Have Covered His Tracks

General Hospital’s Julian may not be stupid enough to attack Martin himself. After all, if Julian doesn’t have an alibi, he would be the number one suspect. However, Julian could have hired someone to steal the letter from Martin. Julian still has thugs that will do his bidding for him. Did Julian contract someone to get the letter from Martin? Will Julian take advantage of Ned Quartermaine’s (Wally Kurth) offer to visit his son to have an alibi?

GH Spoilers – Ava Jerome Could Have Been Behind The Attack

General Hospital’s Ava Jerome (Maura West) knows about the letter as well. Ava also knows that Sonny will kill her brother if the truth comes out. However, Ava is being blackmailed by Scott Baldwin (Kin Shriner) at the moment. Would Ava even think to try and get the letter from Martin? Ava doesn’t often think about anyone but herself so it’s highly unlikely that she would consider helping her brother. Of course, Julian could ask Ava to take care of this for him to give him deniability.

Whether it was Ava or Julian, it is highly likely that Jerome is behind the attack on Martin. Will they get the letter or will Sonny be the next person that Julian has to face for his lies?

The Young And The Restless Comings and Goings: Elizabeth Hendrickson Returns – Chloe Back in GC!