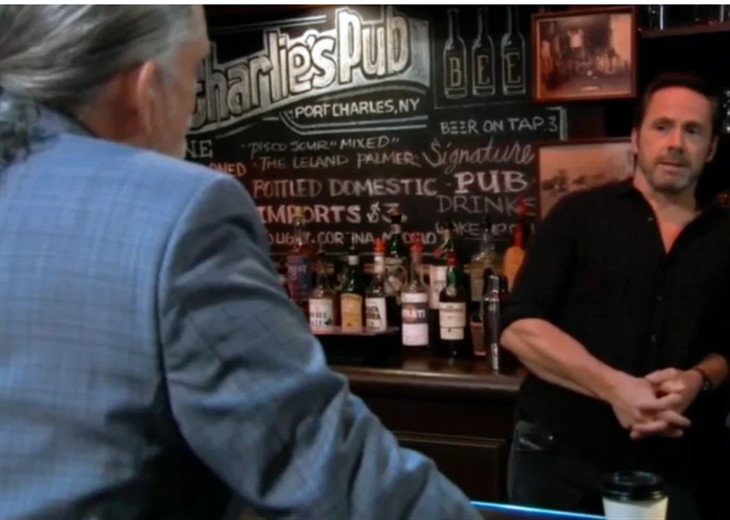 ABC General Hospital spoilers tease that Cyrus Renault (Jeff Kober) might want to buy Port Charles, New York Charlie’s Pub because of something in the box of old photos he believes are still there. Could he have been involved with Charlie Delaney (uncast, but a photo of Charlie onset is Frank Valentini) back in the day and he fears there is a photo of something incriminating?

General Hospital viewers will recall a few years ago during the “Body From Croton” storyline that Charlie Delaney was an old gambling friend of Mike Corbin’s (Max Gail). Their friendship predated Charlie having the pub built since Mike knew of the body being entombed in the foundation under the basement of the pub when it was built. He and Charlie put it there!

The body turned out to be former Port Charles District Attorney Margaux Dawson’s (Elizabeth Hendrickson) late father Vincent Marino (Rick Pasqualone), who she was trying to prove that Sonny Corinthos (Maurice Benard) shot. It had been Sonny’s first job for Joe Scully Sr. (Robert Miano). When Julian Jerome (William DeVry) was cleaning out the pub shortly after buying it, he was aware of Mike’s Alzheimer’s diagnosis and had found a box of old photos, some with Mike in them, some with Charlie, and other people.

He offered the box to Sonny, which he gratefully accepted, hoping that they would jog Mike’s memory. The box of photos was not spoken of again until last week. Cyrus had been visiting Mike in Turning Woods, which Sonny was none too pleased with, and close to the same time his visits started with Mike, he’s been trying to buy the pub from Julian!

GH Spoilers – Could Cyrus Have Been Talking To Mike About The Box Of Photos?

Cyrus probably didn’t get a lot of out of his conversations with Mike. Mike was too far into Alzheimer’s’ to be able to give him any reliable information. Perhaps he thought Mike would bring up memories from the past about Charlie, and other people Charlie was associated with. He may have asked him about a box of photos that had been stored in the pub – which, considering the walls are lined with framed photos would not necessarily be an odd thing.

Mike, with his mind too far gone at that time, may have remembered them being in the pub, but not remembered Sonny giving them to him! It’s a good possibility that those photos now would be mixed in with the photos that Sonny and Carly Corinthos (Laura Wright) were looking at in a recent episode. She was focusing on photos of who she assumed was Sonny as a child, but he didn’t remember most of them! Those old photos may have some incriminating photos of Cyrus from back in the day – perhaps he, too was involved with Charlie Delaney.

One has to assume Charlie was not the most honest guy, being complicit in burying a body in the foundation of his pub! It would not be surprising that Charlie perhaps was involved in the mob back then – after all, that burial sounds like a really mobbed-up thing to do! Cyrus isn’t going to ask Julian for a box of photos, and who knows what else might be in the walls or floors that Mike knew nothing about? He’s talking to Mike and then wanting to buy the pub seem to be connected, and something either in the box of photos or in the pub itself might be the connection!