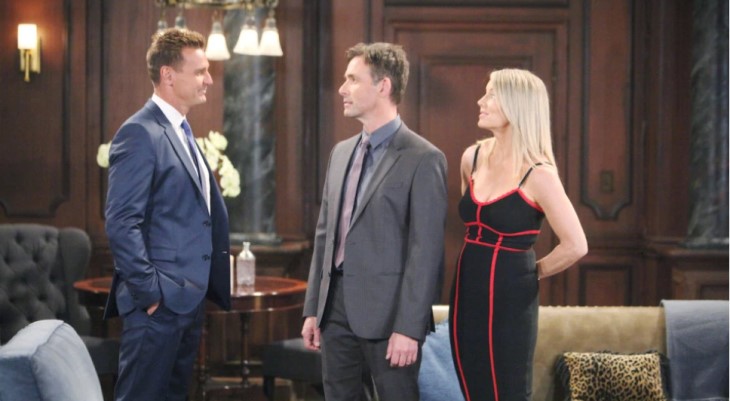 General Hospital spoilers tease that Nina Reeves (Cynthia Watros) might go back to Valentin Cassadine (James Patrick Stuart) if it came down to a custody battle over Charlotte Cassadine (Scarlett Fernandez) in upcoming episodes of General Hospital and he too, as Michael Corinthos’ (Chad Duell) issues, would look better as a married man to family court!

As General Hospital viewers will recall, it looks like Nina will find her long-lost daughter in Nelle Benson (Chloe Lanier) who has been revealed to have a half heart necklace that looks like it could be the other half of Nina’s. She will likely side with her in the custody battle she is going to have with Michael over Wiley Corinthos (Erik and Theodore Olson) but now it looks like there may be another one brewing – between Laura Collins (Genie Francis) along with her daughter Lulu Spencer (Emme Rylan) and Valentin over Charlotte!

It may be a battle of the grandmas when it comes to the little ones, as both sets of parents look like they may be having some problems! Valentin could counter that Lulu isn’t watching Charlotte closely enough since it was on her watch that Charlotte was kidnapped, while Laura and Lulu will counter that Valentin is unemployed with no stable home since losing out to Nikolas Cassadine (Marcus Coloma) when the codicil was found, which, with a DNA test, proved Valentin was not a real Cassadine, his mother being Helena Cassadine (Constance Towers) and his father being one of her lovers!

If it’s one thing that will get Nina Reeves on someone’s side, it’s a parent in danger of losing their child! Nina will do anything because that is her soft spot! So Nina might go back to Valentin and even remarry him if it boils down to him losing his ma petite, and he has to show income and a stable place to live, even if they get a place together on her money! Things might get ugly in these custody battles and Nina is likely going to be smack dab in the middle of both of them!

GH Spoilers -There Will Be Two Weddings – But Who Will Marry Who To Get Custody Of Who?

There was a spoiler video released a couple of months back of some shots taken while General Hospital was still filming – we are going to see these scenes soon. There will be two weddings, but who will marry who to get custody of who? Michael will probably marry Willow Tait (Katelyn MacMullen) thinking he will stand a better chance of getting sole custody of Wiley, and it did show Nelle in a wedding gown.

But could that be a red herring or something Nelle is dreaming about, considering she spins around in the wedding dress and it looked kind of foggy? Valentin certainly wouldn’t marry Nelle, and in Tuesday’s episode, he pretty much put the kibosh on any of those ideas. Nelle tried to imply that she could do bad things to him but she’s no match for him, as he showed her.

That way Valentin and Charlotte have Nina’s income, plus any residual money he has left from before he took over Wyndemere Castle and all that he had to relinquish to Nikolas, and Wiley, as well as Charlotte, would be shown to have a stable home! None of Valentin’s crimes can be proven, and anything he did as a mercenary would be too far in the past.

Stay tuned to GH, and keep checking General Hospital spoilers frequently for all the latest news, updates and developments