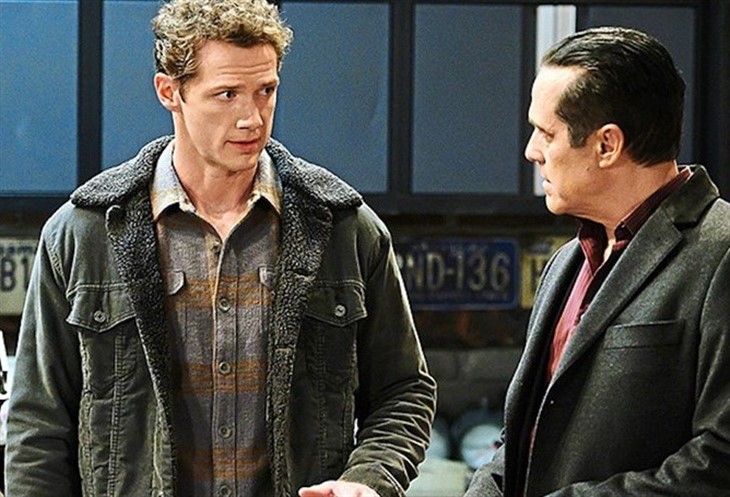 ABC General Hospital spoilers and updates reveal Brando Corbin (Johnny Wactor) has agreed to work with Sonny Corinthos (Maurice Benard) and Jason Morgan to take down Cyrus Renault (Jeff Kober). Will their plan work or are they being played?

General Hospital’s Jason had a plan and pitched it to Brando. However, Sonny had to approve it. Now that Brando seems to be defending himself, Sonny seems to be ok with the plan. Sonny and Brando seem to argue as Cyrus watching with a grin.

Does Cyrus think he is getting his way or is Sonny’s plan working? Brando is trying his level best to help take down Cyrus, especially since the PCPD isn’t doing anything to get rid of him. Yet while Brando is putting his life at risk, his mother could just get him killed.

General Hospital’s Gladys Corbin (Bonnie Burroughs) is certainly a wild card. Glady has blown into Sonny’s party for Mike and demanded that Brando be given his rightful place in the organization. Sonny is very annoyed with Gladys for talking business at a celebration of his father’s life. Sonny has recently tried to shut down Gladys demands which didn’t work.

Frankly, Carly Corinthos (Laura Wright) and Sam McCall (Kelly Monaco) continue to try to put Gladys in her place. Carly makes it clear that the ATM is closed but Gladys certainly won’t listen. However, Gladys isn’t about to take no for an answer. Will Gladys put her son’s life in danger by not listening? Imagine Gladys going to Cyrus and acting the way she does toward Sonny. Cyrus could very well kill her and Brando.

General Hospital’s Jason seemed to believe that they could pull this plan off, however, they need to be very convincing. Could Gladys be in on the plan? It is very unlikely that Gladys knows any details about the plan because it would put everyone in danger. Will Gladys blow the plan before it comes to fruition? Could Cyrus decide that Brando isn’t worth the trouble and possibly kidnap him instead? Cyrus could easily use Brando as a bargaining chip. Will Brando be able to keep his mother in check?

Somebody has to take down Cyrus and Sonny seems to have been voted into that position. Can Sonny and Jason take down Cyrus without Brando getting hurt? Will Cyrus see through their plan or fall for it as they hope? Is the end of Cyrus much closer than he thought? Will everyone survive in the end?