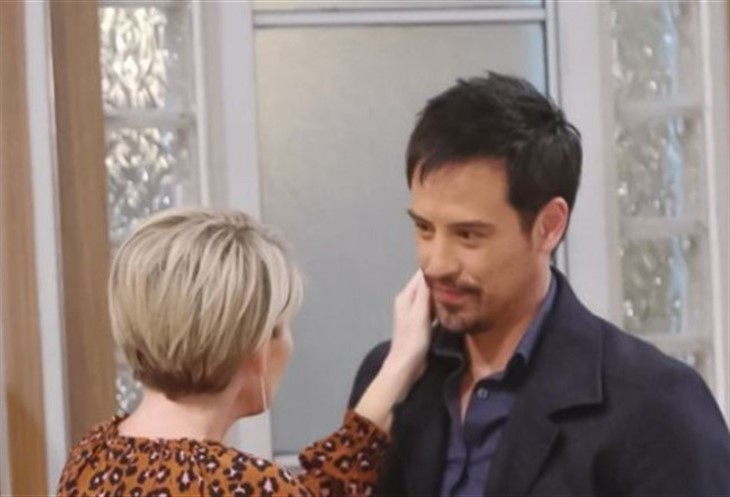 General Hospital (GH) spoilers tease that in Port Charles, NY Julian Jerome (William DeVry) will be exiting Port Charles for good in the near future. It’s not known if Julian will survive with Sonny Corinthos (Maurice Bernard) and Cyrus Renault (Jeff Kober) having the motive to want Julian dead.

It’s always possible Nikolas Cassadine’s (Marcus Coloma) offer to get Julian out of town and with a new identity will still happen as long as Nikolas doesn’t find out that Julian is responsible for leaving the bomb at the Floating Rib, which will seriously injure his sister, Lulu Falconeri (Emmy Rylan). But no matter what, Ava Jerome (Maura West) will be without the one person she could always count on and will likely be devastated.

If Ava finds out that Julian told Cyrus that Marcus Taggert (Real Andrews) is still alive, therefore putting young Trina Robinson (Sydney Mikayla) in danger once again, she will be furious with her brother. Ava and Trina have gotten quite close and Ava feels very protective of the teen. But Julian is still Ava’s brother and that bond can’t just be erased. Ava will likely find once again that Nikolas will offer support as she deals with the ramifications of Julian’s last days in Port Charles.

GH Spoilers – Ava Jerome And Nikolas Cassadine Have Finally Begun To Act Like A Couple!

It’s taken almost a year, but Ava and Nikolas have finally started to realize they have real feelings for another. In order to protect Ava and Julian, Nikolas told Sonny that he ordered the hit on Ryan Chamberlain (Jon Lindstrom) when it was actually Cyrus who had Ryan stabbed to keep him quiet. If Sonny knew that Julian had something to do with Ryan’s stabbing right before he was about to tell Sonny incriminating information on Julian, he would demand to know what Julian is hiding. So Nikolas stepped up and kept Sonny from finding out that Julian knew about the baby swap from almost the beginning, helping to keep Michael Corinthos (Chad Duell) away from his son for almost two years.

With her allies in Port Charles dwindling, Ava should finally accept that she and Nikolas are in love. Nikolas can provide Ava the kind of unconditional love that she requires since she is often doing things that stir up the drama. Perhaps Nikolas will offer to make sure Trina is protected so Cyrus can’t kidnap her once again in order to draw Taggert out. Ava will feel responsible for Julian’s big mouth and wouldn’t be able to live with herself if Trina was harmed because of her brother’s cowardly actions. There is also the looming threat of Ryan. If he wakes up from his coma, he’ll likely find a way to escape custody and come after Ava. Nikolas will obviously do anything to keep Ryan away from his wife.

The one thing that might come between Ava and Nikolas is Lulu Falconeri (Emme Rylan) and the extent of her injuries at the Floating Rib explosion. If Nikolas finds out that Julian dropped off the bomb, part of him may blame Ava for protecting Julian for so long. But hopefully, they will find a way to get past that and become a real couple finally?

How will Julian leave Port Charles? Will Ava and Nikolas find themselves growing closer? Will Nikolas step in to help clean up Julian’s mess by offering to protect Trina? And how will the revelation that Julian is partially responsible for the explosion that has seriously injured Lulu?

Exciting times are coming up in Port Charles so stay tuned to General Hospital, airing weekdays on ABC. And don’t forget to check back here regularly for all your General Hospital news, information, and spoilers!