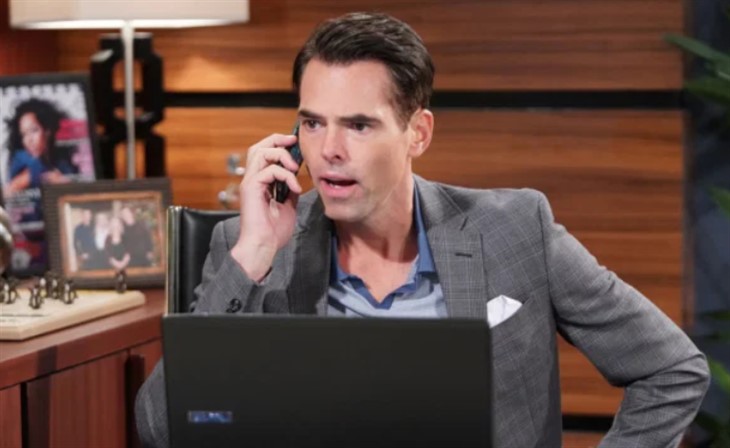 CBS The Young and the Restless spoilers document that Billy Abbott (Jason Thompson) is determined to expose Adam Newman’s (Mark Grossman) activities. Alyssa Montalvo’s (Maria DiDomenico) ability to make contact with the widow of the man Adam killed, in claimed self-defense, in Las Vegas, Nevada, gives Billy hope that some form of justice will be served.

Lily Winters’ (Christel Khalil) initial hesitation about Chance Com serving as the platform for Billy’s vendetta remains apt. She needs to keep an eye on him in order to try and prevent damage being done to the division of Chancellor that they were both hired to head and develop.

Lily and Billy recently had a conversation where she discussed her desire to use the company’s platform to advance certain goals that she perceives are important. Billy has been having conversations with Alyssa that involve Chance Com using it’s digital ability to slam Adam.

There’s no doubt that Adam wronged Billy when not reporting what he believed was his involvement in Delia Abbott’s (Sophie Pollono) tragic death in the fall of 2013. Now, seven years later, Billy is claiming that he isn’t seeking revenge, but is actually doing exactly that. His intent to use the position Jill Abbott (Jess Walton) gave him is mostly misguided, though Chance Com will certainly gain attention through the story Alyssa plans to have published.

Alyssa, like Billy, wants to get Adam. Knowing that’s probably not possible, where the circumstances surrounding her father’s death is concerned, she’s now laser-focused on Vegas.

Viewers and Billy don’t know what Alyssa actually knows. But it appears clear that her contact with the dead man’s widow is enough to link Adam to what happened.

Exposing Adam and Chance Chancellor’s (Donny Boaz) actions will potentially create legal trouble for both men. But what retaliatory effects would Chance Com suffer as a result? That’s the main issue that Lily is concerned about.

The Young and The Restless #YR News Update: Jason Thompson Had A Special Delivery – Details Herehttps://t.co/smotcsRlit

The Young And The Restless Spoilers – Victor Newman Has His Say

Victor Newman (Eric Braeden) is battling with Adam again. However, the Moustache’s paternal obligations will probably lead him to defend his youngest son if this other killing issue is exposed.

Y&R fans, along with Alyssa, Billy, and others, believe that Adam and Victor aren’t going to face any consequences for what happened in Kansas. So, the current setup pits the Chance Com parties against two Newman’s, with Victor expected to close ranks no matter what Adam says, or does.