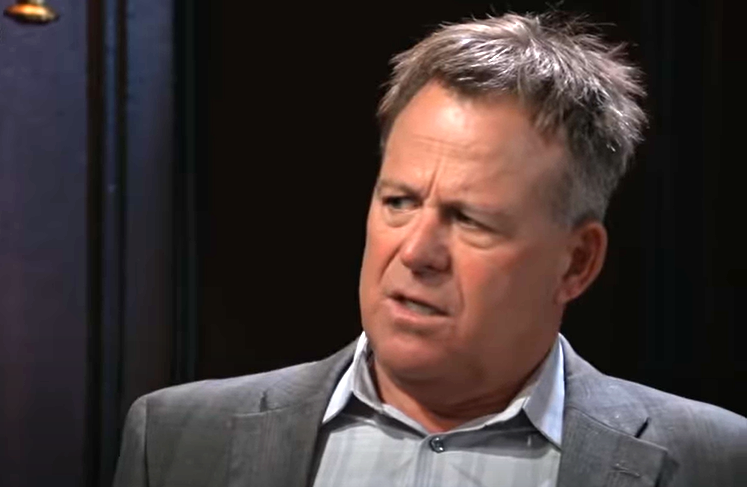 ABC General Hospital spoilers and updates reveal Scott Baldwin (Kin Shriner) has never been squeaky clean. However, working for the mob would be something new as far as Scott is concerned. Will Scott take a job working for Cyrus Renault (Jeff Kober)?

General Hospital’s Scott is very close to Lucy Coe (Lynn Herring). Lucy and Scott have had their shares of romance and affairs. However, Lucy seems very taken with Port Charles’ lastest bad boy, Cyrus. Lucy is convinced that Cyrus is a good guy which fans know is not the case. Lucy has been warned to stay away tom Cyrus because he is dangerous. Lucy has no idea how dangerous Cyrus can be.

General Hospital Spoilers: Is Carly Corinthos About To Pack Heat And Join The Mob?

General Hospital’s Cyrus wants to take over Port Charles. Cyrus tried to have Sonny Corinthos’ (Maurice Benard) entire family killed. Of course, there is no proof of what Cyrus has done. Sonny and Jason Morgan (Steve Burton) are working tirelessly to get Cyrus out of town. Unfortunately, that hasn’t worked so far. Cyrus has done nothing but achieved a larger hold on Port Charles. Now Cyrus is Chairman of the Hospital Board and a benefactor is both the hospital and the nurses’ ball. Cyrus wants to get rid of Sonny including taking over projects that Sonny supports.

General Hospital’s Scott absolutely loathes Sonny. Scott blames Sonny for his daughter Karen Wexler’s (Marie Wilson) death. Karen was a young doctor’s participant turned stripper and Sonny owned the club so Scott blamed him. Sonny cared about Karen and wouldn’t hurt her. However, Scott refuses to see that and had tried to take Sonny down himself. Scott has never worked or the mob before no matter how crooked he has gotten in the past. However, if it provides a chance to bring down Sonny, even after all these years, Scott would probably jump at it.

GH Spoilers – Scott Baldwin Would Do Anything For Lucy Coe

General Hospital’s Scott would do just about anything for Lucy. Scott has always been there when Lucy has needed him and will continue to do so. Lucy could easily convince Scott to work with Cyrus if Sonny is not incentive enough. Lucy believes that Cyrus is a good man. Jordan Ashford (Brianna Nicole Henry) has come out in public support of Cyrus. No one knows that Jordan is being forced to support Cyrus. No one also knows that Jordan is working with Jason Morgan (Steve Burton) to try and take Cyrus down. Lucy and Scott will be in for a rude awakening.

General Hospital’s Sonny and Jason are determined to get Cyrus out of town no matter what it takes. Will Scott go down with him as his attorney?

The Young And The Restless Spoilers: Rey And Nick Should Be Jealous – Adam And Sharon Are Explosive Together