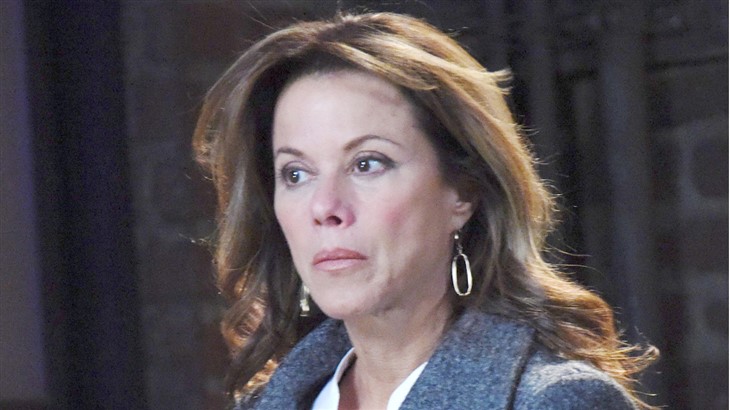 ABC General Hospital spoilers and updates reveal Alexis Davis (Nancy Lee Grahn) has been on an emotional rollercoaster since reuniting with her one-time therapist, Neil Byrne (Joe Flanigan). After a very indecisive few months, the two decided to give their relationship a chance, only for Neil to turn up dead the next day. On top of all this drama, Alexis has been having problems with her wrist that she blames on an injury at the gym. Unfortunately, Alexis is facing much more than she thought.

Alexis started out with soreness in her wrist and has been treating it herself at home. Alexis has bothered to seek any professional help although her condition has not improved at all. Both Sam McCall (Kelly Monaco) and Diane Miller (Carolyn Hennesy) have expressed their concern over Alexis’ condition. However, it is Ned Quartermaine (Wally Kurth) that insists on getting to the bottom of things. After Alexis drops a simple cup of coffee, Ned insists on taking Alexis to General Hospital to get to the bottom of things. Alexis is not ready to hear what she finds out.

Alexis has been through a lot of things in her years on General Hospital. A c-section in a train tunnel while her daughter, Sam, was being stalked by a madman. Battling cancer while raising two young children. Julian threatening to kill her with that dagger that killed her mother. An alcohol addiction spurred by Julian Jerome’s (William DeVry) abuse.

Finding her boyfriend dead in her bed from an overdose after a night of passion. However, Alexis may not be ready to face the devastating osteoporosis diagnosis. However, General Hospital writers have always brought important medical conditions into the programming to inform the public as well as telling a good story. Alexis being a woman over fifty and facing this diagnosis is a reality for so many women in the world today.

General Hospital Spoilers: 3 Reasons Why Nikolas And Ava Will Have A Babyhttps://t.co/RqdtZobWur

General Hospital Spoilers – What Is Osteoporosis?

General Hospital’s Nancy Lee Grahn will be on The View discussing Osteoporosis and how her character is bringing this diagnosis to the forefront. Osteoporosis occurs when new bone growth doesn’t keep up with the old bone loss.

Hormonal changes can contribute to osteoporosis but Portia Robinson (Brook Kerr) is likely to explain that the chemotherapy that Alexis had years ago can be a factor as well. Unfortunately, osteoporosis can lead to a bone-breaking from something as simple as a sneeze. Could Alexis’ sore wrist actually be broken instead?

The General Hospital Facebook page has been tagging Taking Charge Of Osteoporosis. This story coming on the heels of Mike Corbin’s (Max Gail) lost the battle with Alzheimer’s is keeping current medical concerns in the spotlight.