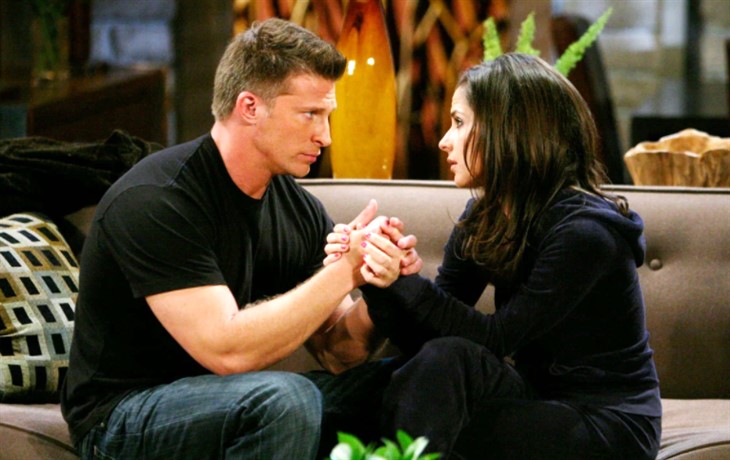 General Hospital spoilers say that the moment everyone has been waiting for in Port Charles, NY is finally here, and that’s seeing Jason Morgan (Steve Burton) and Sam McCall (Kelly Monaco) in each other’s arms and at peace. But if there’s anything we’ve learned about this town of Port Charles, it’s that these peaceful moments don’t last forever.

As a matter of fact, it won’t take any time at all for someone or something to disrupt the love that Jason and Sam are feeling right now. That’s why we’ve got five reasons why Jason and Sam’s future is looking anything but positive. Check it out below and let us know what you think.

While there’s no doubt that there is both love and attraction between Sam and Jason, it seems like Jason has taken on more of a father figure role, especially when Sam was still on parole and needed someone to keep her in line. Of course, even fans know that it will only be a matter of time before Sam slips and Jason will find himself in a position in which he will continually have to keep a safety net underneath Sam in order to catch her each time she falls. He’s like her own Kevin Costner from The Bodyguard.

With a town like Port Charles being as chaotic as it is, Jason Morgan is forced to always stay on his toes. There’s always someone who needs his help if it’s not Sonny Corinthos (Maurice Benard) or his best friend, Carly Corinthos (Laura Wright). Seeing how General Hospital spoilers say that something explosive is going to happen by the end of the month, we have a feeling that it will also lead to a huge distraction between Jason and Sam.

With everything said above, there’s also the possibility that Drew Cain (Billy Miller) might reappear in Port Charles, despite the fact that he is currently presumed to be dead.

With Franco Baldwin (Roger Howarth) in need of desperate medical attention, there’s a chance that Billy might come back home and yes, immediately try to sweep Sam off her feet. After all, there was a lot of love leftover between them. Watch this space as Jason and Sam’s relationship is going to take on a new twist very soon.