General Hospital Rumors: Will Wiley Be The One To Blow The Secret That He Is Jonah? He’s Getting Old Enough To Start Talking! 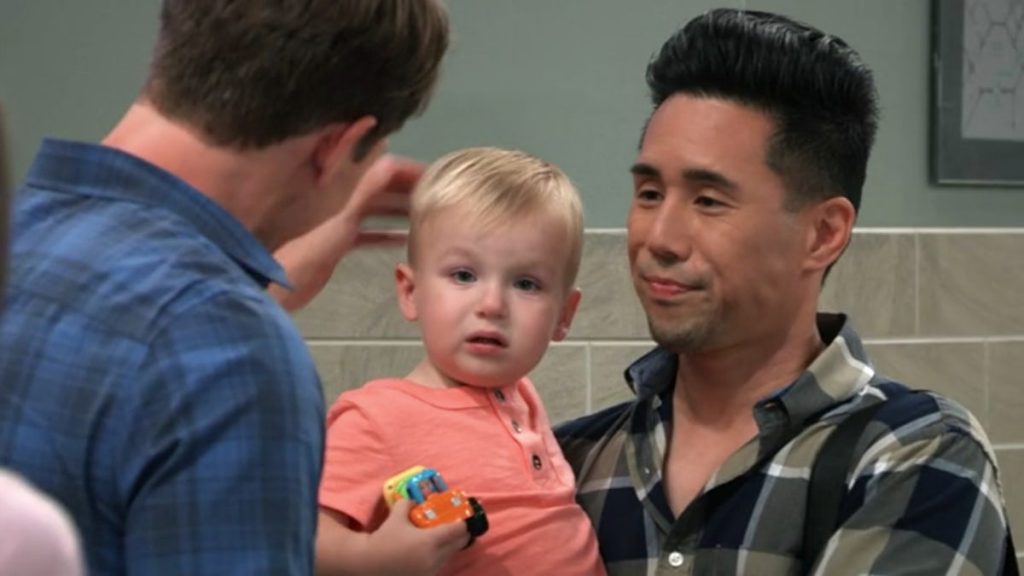 GH Spoilers: Would Anyone Ever Consider That Wiley Cooper-Jones Might Be Old Enough To Understand What Is Being Said And Repeat It?

Wiley, who as General Hospital viewers know is really Jonah Corinthos, is just a little over one year old. That is the age when babies start to turn into toddlers, and toddlers are very inquisitive. Toddlers learn to crawl, walk, and most importantly ,they learn to talk! And how do they learn to talk? By mimicking what they hear! Wiley may not understand everything he is repeating, but he will repeat it!

General Hospital viewers know he already knows how to say a few words, such as “ball” which he has interjected into more than one conversation of his elders when he was present! He has shown plenty of signs that he understands what people are talking about around him, one notable example being the frown he made at Brad Cooper (Parry Shen) when Michael Corinthos (Chad Duell) was called to the daycare center to pick him up when they couldn’t get ahold of Brad, who had forgotten to turn his phone on and Michael also had noted that Brad didn’t pack any snacks for him!

General Hospital Spoilers: Brad Cooper Is Not Careful What He Says In Front Of Wiley Cooper-Jones

Other than dire news about Lucas Jones (Ryan Carnes), which he is careful not to talk about in front of Wiley, Brad is not particularly concerned or careful as to who he talks to or what he talks about in front of him. He probably assumes because Wiley may be too young to remember certain things, that he is also still too young to understand conversations of adults around him, and with a somewhat limited vocabulary, he doesn’t worry about Wiley repeating information that should be kept secret.

But Brad talks about Wiley being Jonah a LOT to Julian Jerome (William DeVry) in particular, and sometimes he might even talk about it to Lucas if he brings Wiley to see him. Wiley likely just thinks his daddy is asleep when his other daddy brings him to visit. Mention was made that Wiley misses Lucas, so Brad may take him for an occasional visit since Lucas is currently not on life support.

There is a lot of medical evidence that coma patients, while they cannot respond, do hear what is said to them and possibly feel when a loved one strokes their faces or holds their hands. General Hospital viewers will recall that Brad confessed Wiley was Jonah to Lucas just before the car crash that put him into the coma, which has now been several months ago.

GH Spoilers: What If Wiley Cooper-Jones Says He’s Jonah In Front Of The Wrong Person?

What if Wiley says he’s Jonah in front of the wrong person – say he’s with Michael, or even worse, Carly Corinthos (Laura Wright)? This might be why Brad doesn’t want him anywhere near the Corinthos family if he can possibly avoid it, but he won’t be able to avoid it entirely.

Maybe Wiley has already said the name “Jonah”. Brad could pass it off that he’s been reading him Bible stories, such as the one about Jonah being swallowed by the whale and that’s where he learned the name, but what if he actually forms a sentence and says he’s not Wiley, he’s Jonah? That certainly would be the irony of ironies if Wiley himself reveals the truth about who he really is!