Welcome to your Thursday, February 20th General Hospital (GH) recap! We begin our day at Sonny Corinthos (Maurice Bernard) business where Jason Morgan (Steve Burton) is updating him on Cyrus’s men and the subsequent explosion. Jason says he below up more than 20 million dollars who of goods.

At Pentonville Prison, Cyrus Renault has a visitor and its Jordan Ashford (Brianne Nicole Henry. He asks her to call him Cyrus as she used to. 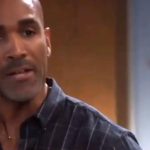 Sasha Gilmore (Sofia Mattsson) opens the door and thanks to Harrison Chase (Josh Swickard) for coming so quickly. Carly Corinthos (Laura Wright) embraces her son Michael Corinthos (Chad Duell) and says its horrible he lost a year with his son. Michael walks over and yells at Brad Cooper (Parry Shen) about all the horror he has caused.

Carly calls the cops and says they need to send a squad car to Willow’s, as Chase and Michael head out. Lucas asks Brad who else knew about the switch and he swears no one else did. Brad says he panicked when their baby died in the crib.

After the huge fight, we see Willow Tait (Katelynn Macmullen) knocked out on the floor as Nelle Benson (Chloe Lanier) comes out of the bedroom holding Wiley. Nelle double-checks the passports and opens the front door to find Michael and Chase blocking it.

Chase tells Nelle to put Wiley down as Michael says he knows everything, but Nelle says he does not know the whole story. Nelle lies about how the baby switch happened; she pretends she never knew.

At Pentonville, Jordan Ashford (Brianne Nicole Henry) tells Cyrus that she is now commissioner and he says he remembers her as his “right hand.” He says she used to do work for him as a single mother and he knows TJ is now in med school.

Cyrus says trusting her was a huge mistake, she was supposed to be his protégé. Jordan says someone leaked her secret identity and he says there four traitors – two are dead.

Jason Morgan (Steve Burton) says that they sent a clear message that they are in control of the waterfront. Sonny says that Cyrus is causing trouble for “personal reasons”, but he doesn’t know what they are.

At Kelly’s, Cameron Webber (William Lipton) asks Trina why she did not mention that her father was in town. She says that he just got in and he says he wants to meet the young man who is taking his daughter to the dance.

Taggert says he knows Cameron’s mother Elizabeth Webber, his cousin Gina used to run with her back in the day. Marcus glances towards the window and sees that Curtis has been following him. Taggert goes out to confront Curtis and they get into a verbal altercation until Jordan arrives to break them up.

Chase stands behind Nelle and forces her to hand baby Wiley over to Michael. Once alone with Jordan, Curtis asks if she is Trina’s mother. Jordan freaks out and says Taggert and her have never, ever been intimate.

Chase finds Willow unconscious and she begins to awake as Nelle is arrested. Lucas is livid by what happened and just can’t believe Brad lied to everyone. Michael shows up at the Corinthos mansion with baby Wiley, to everyone’s relief………flash to preview

The Young and the Restless Spoilers: Sharon’s Pregnant Pause – Is She Expecting?