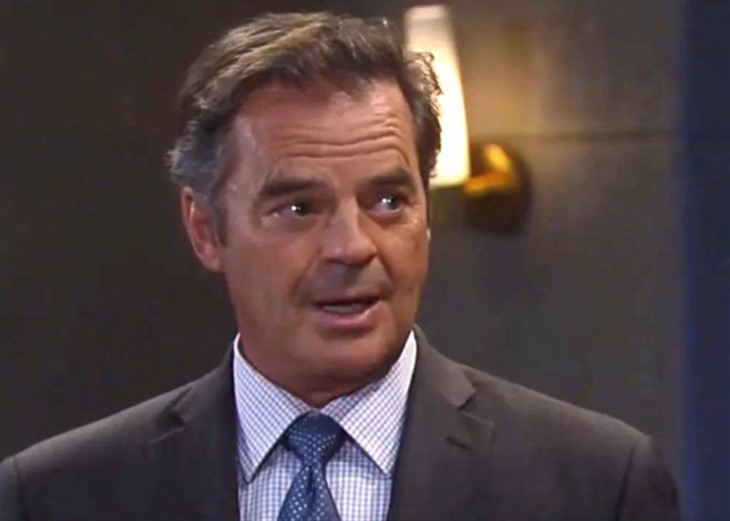 General Hospital (GH) spoilers tease that in Port Charles, NY Ned Quartermaine (Wally Kurth) will be called away to help a friend, while Olivia Quartermaine’s (Lisa LoCicero) relationship with Tracy Quartermaine (Jane Elliot) will take a positive turn this week on GH!

General Hospital viewers will recall that Tracy, trying to help Ned in her manipulative way, set up Alexis to be arrested for drunk driving, hoping to get her into rehab. Alexis steadfastly refused, preferring to spend the night in the Port Charles Police Department’s drunk tank! To make matters even worse for herself, when her daughter Molly Lansing-Davis (Haley Pullos) and TJ Ashford (Tajh Bellow) bailed her out, she started sneaking vodka.

They had brought her over to TJ’s parents’ house for Christmas and after Jordan Ashford (Briana Nicole Henry) left on the hunt for an angry and absent Curtis Ashford (Donnell Turner) Molly smelled Alexis’ coffee cup and told her to leave! Alexis was left out of the notification loop about the death of her ex-husband and first love, Julian Jerome (William DeVry). She has denied she had anything but contempt for him for quite some time, but her over-the-top denials hint at feelings being pushed down. She got a news alert from the Invader on her cell phone with the story about his body being found.

This was likely going to send her into even a worse tailspin, after having moved on with Dr. Neil Byrne (Joe Flanigan) who died in her bed of a drug overdose! Having been bailed out, she likely is picked up again for intoxication with her bail revoked. She practically drove Diane Miller (Carolyn Hennesy) her close friend and former legal partner away, so Ned goes to the PCPD to assist her legally. Dr. Hamilton Finn (Michael Easton), her AA partner is also likely notified.

In Ned’s absence, Olivia and Tracy get a little closer. Olivia was very worried about how Alexis would take the news of Julian’s death, Olivia practically fell apart herself! Even though Tracy has more concern that a drunken Alexis will destroy Ned’s marriage by revealing her and Ned’s one night stand, Olivia believes her story about trying to get Alexis help for her drinking!

Tracy can make her concern, and Ned’s, for Alexis needing rehab very believable – as longtime General Hospital viewers will recall, her late nephew AJ Quartermaine (Sean Kanan) had quite a drinking problem. Olivia may not know the story of how AJ drove drunk one night, and Jason Morgan (Steve Burton), then Jason Quartermaine, ran out of the Quartermaine mansion trying to stop him. He got in the car with AJ, but AJ slammed into a tree on the Quartermaine property, ejecting Jason from the car with his head hitting a rock! AJ, of course wasn’t hurt at all as is typical in drunk driving accidents.

Ned, who was in the living room, saw the whole thing happen and ran out to help. It was Jason’s traumatic head injury stemming from this accident that changed him from Jason Quartermaine, an upcoming med student, into Jason Morgan, mob enforcer! He hated the Quartermaines for many years, bonding to Sonny Corinthos (Maurice Benard) as his family. It has only been in the last couple of years that Jason started forgiving his family of origin and bonding to them again. Olivia is happy Ned cares, and that he wanted to help, but knowing about AJ and Jason’s wreck and how Ned rushed out to help makes a lot more sense. Ned seemed a little too eager to be Alexis’ knight in shining armor, even though it was Olivia who was worried about how she’d react to Julian’s death!

The Young And The Restless (Y&R) Spoilers: Nick Drills Sharon About Wedding – ‘What About Adam?’