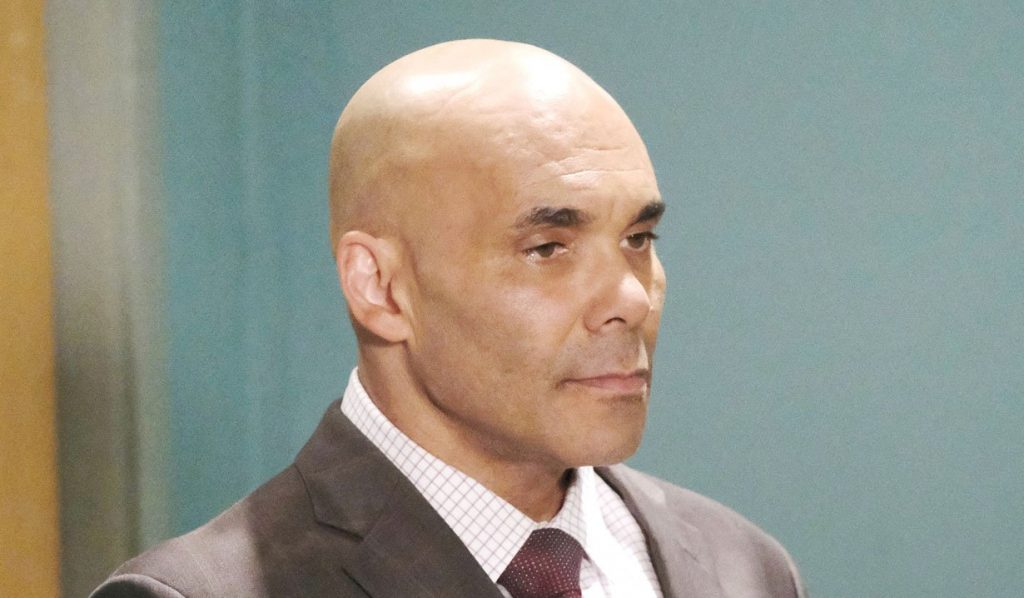 General Hospital spoilers reveal that after a seventeen year absence, Real Andrews is back on GH as Marcus Taggert!

General Hospital fans will recall that Detective Marcus Taggert was a thorn in Sonny Corinthos’ (Maurice Benard) side from 1996 to 1998, and then again from 1998 to 2003 as Real Andrews initially played Taggert, and arrived in Port Charles gunning for Sonny. Then he left for a while, and stepped back into the role. Real, and Taggert has been away from Port Charles for nearly two decades, but fans have never forgotten; in fact, the character has been referenced many times over the years, and longtime General Hospital viewers will recall the days when the PCPD was a true force to be reckoned with.

Why Is Detective Marcus Taggert Back In Town?

Fans are wondering why Taggert is suddenly back in town and breathing down Sonny’s neck again after this many years. There could be several possibilities. He could be the person that Commissioner Jordan Ashford (Briana Nicole Henry) called recently for help with the Bob Massicotte (Randy J. Goodwin) case. He could also be involved with the unknown persons who hijacked Sonny’s coffee truck and burned it – perhaps, like when Detective Harrison Chase (Josh Swickard) came to Port Charles looking for Nelle Benson (Chloe Lanier) to take her down, Taggert is on the trail of whoever is behind the hijacking of Sonny’s truck!

How About Family Ties In Port Charles?

He could also be involved in some side stories while he is in Port Charles – fans noted that he and Stella Henry (Vernee Watson) are in town at the same time; could GH have thrown out a red herring in that Marcus Godfrey (Nigel Gibbs) was Stella’s beloved Marcus of her youth, and it really have been Marcus Taggert? It’s unlikely, but General Hospital writers have been known to change history before – like Drew Cain (Billy Miller) being the unknown twin of Jason Morgan, (Steve Burton) Scott Baldwin (Kin Shriner) having an affair with Heather Webber (Robin Mattson) and producing Franco Baldwin, (Roger Howarth) and more recently the body in Croton story, where Sonny started out burying the body of former DA Margaux Dawson’s (Elizabeth Hendrickson) father, and ended up being the hitman! What if Marcus Taggert winds up being Stella’s old flame, and maybe even the birth father of Curtis Ashford (Donnell Turner)?

There does seem to be some resemblance between the two, and Trina Robinson (Sydney Mikayla) is expected to be either revealed to be the daughter of Curtis, possibly making Taggert her grandfather, or the child of Nikolas Cassadine (Marcus Coloma) and Gia Campbell, originally Marisa Ramirez and most recently Andrea Pearson.

How Long Will Real Andrews’ Return Be?

Real did share a photo on his Instagram page several months ago showing him with fellow GH star Kin Shriner, and added hashtags about it being audition season and nobody seemed to suspect otherwise. However, it is possible that this is when he was actually back on set preparing for this return. Andrews recently underwent cancer surgery, which had perhaps thrown some fans off from thinking that Jordan had called Taggert. In spite of his real-life battle, it does look like the actor is fighting hard and doing well, and many fans hope that means that Taggert’s presence in Port Charles will be an ongoing one.