Emmerdale spoilers hint that Paddy Kirk (Dominic Brunt) and Chas Dingle (Lucy Pargeter) will continue to have problems that will have to do with their daughter. Ever since Chas found out that Paddy left their daughter in the car, she has lost trust in him when it comes to their child. However, after an argument, Paddy left Chas and decided to go off on his own, will his leaving end their relationship? 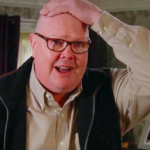 When Paddy made the mistake of leaving their child in the car, it seemed like Chas would not be able to forgive him. Anytime that Paddy tried to go near their child or hold their child, Chas would take her away from him. This has not gone unnoticed by Paddy or by the people around them. As the ceremony on the 23rd, Paddy calls Chas out for not trusting him with the child, and she screams back that him that she didn’t because he left their child in a car by herself. This happened at the pub in front of everyone and confirmed their suspicions that something had happened.

This did make Paddy feel guilty, and after a brief argument, he decided just to leave Chas since he felt like he could not be a good father to their child. However, after a while, he decided to go back home and was greeted by Chas, who was upset over something new. He had missed the social service people, which means that they will have to come back on another day. This upset Chas and made her turn cold toward Paddy once again.

With Chas upset with Paddy again, will she be able to forgive him, or will she continue to push him away? This path that Chas and Paddy could lead them to resent one another or even lose their child over this. However, if they both want to do right by their child, they will need to come together in order to keep their child in their care. What do you think? Will Paddy and Chas makeup, or will they break up? Will they keep custody of their child? Be sure to catch up on everything happening with the soap right now. Come back here often for Emmerdale spoilers, news, updates, and rumors!

The Bold and the Beautiful Spoilers: Quinn Hopeful She Can Take Down Brooke With Dirty Revenge Plan