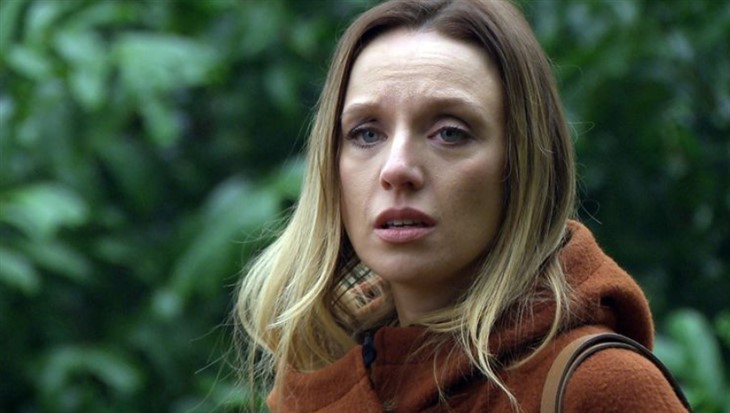 ITV Emmerdale spoilers and updates reveal that Jamie Tate (Alexander Lincoln) is panicked over his missing wife and daughter. He also knows that police look at him as being responsible. Did Andrea Tate (Anna Nightingale) intend to cause all of this distress or did she not mean for things to go this far? The actress reveals that Andrea’s goal is to teach Jamie a lesson, but could it backfire?

Jamie and Belle Dingle’s (Eden Taylor-Draper) text messages were aired publicly. At first, Jamie put the blame on his mistress. However, he later discovered that it wasn’t Belle who exposed the affair. It was his own wife, Andrea. Despite her begging for their family to stay together, the deception only made Jamie more sure of his decision to move on.

Speaking to Express, Nightingale confirmed that disappearing with Millie was an intentional act. She is desperate to hold onto Jamie and came up with one final act to try and force his hand. The actress explained,

“Andrea’s decided that she needs to do something further, she needs to make more of an impression. I think she got to the point where she wants to teach him a lesson.”

There are a few different ways Andrea’s plan can backfire. If she comes back on her own, how will she explain this to the police? Law enforcement does not like to waste time, money, resources, and manpower on fake cases.

If the police end up locating Andrea, Kim Tate (Claire King) will definitely use her money to hire Jamie the best divorce lawyer possible. Andrea could lose custody based on her recent and current actions.

There is also the possibility that Andrea will contact Jamie and try to make a deal. Either they remain a family or she will disappear with Millie forever. Whichever way this storyline goes, Andrea is going to end up losing. It would be in her best interest to just take Millie and return home before this goes any further.