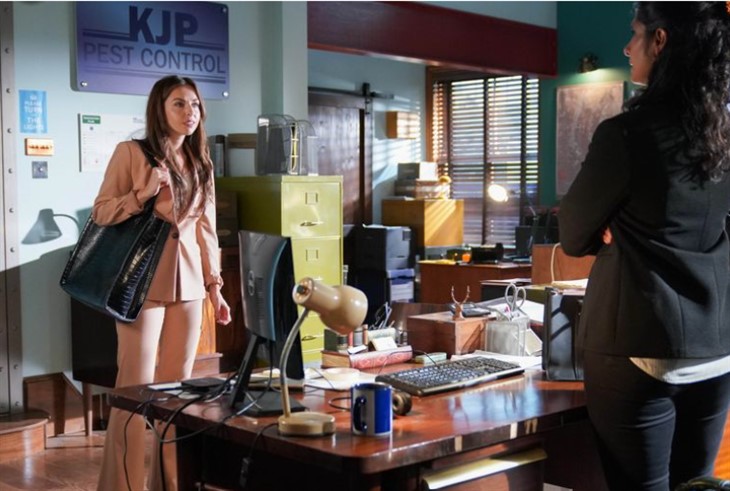 BBC Eastenders spoilers reveal that in Walford Ruby Allen (Louisa Lytton) joins forces with Suki Panesar (Balvinder Sopal) to destroy the Slater family. Even though Stacey Fowler (Lacey Turner) is the one Ruby has a problem with, Suki will target Kush Kazemi (Davood Ghadami). Eastenders Stacey and Jean Slater (Gillian Wright) try to stop Kush from losing everything, but they might be too late.

During the lockdown, Kush began gambling online and it has escalated. He is now addicted to it, although he is in denial. The Slaters are already having a tough time and it’s about to get worse. Part of it is due to Suki raising the rent and the other part has to do with Kush’s increased gambling risks.

Eastenders spoilers reveal that Ruby and Stacey are in the middle of a war. It was Stacey that stole her former best friend’s identity and charged up a storm. The two women reached an agreement where Ruby would be paid back. However, Stacey seems to be delayed making her payments. Things are escalating between the two, which leads to Ruby partnering with someone.

Ruby joins forces with Suki and the Panesar matriarch wastes no time setting a trap. She ends up targeting Kush by inviting him to a poker game. Even though he is suspicious at first, he can’t resist temptation. The actor confirmed to Inside Soap that Kush ends up finally accepting the invitation to gamble. He thinks that he has more than luck on his side and he can actually win.

Plus, there is a personal reason why he risks gambling with Suki and the Panesar boys. He is sick and tired of the Panesars looking down on him and the Slater family.

“After Suki offers Kush the opportunity to make a bit more money through an actual poker game, it’s far too tempting for him to resist,” shares Davood. “Once the offer is put on the table and he sees that environment, Kush wants to be part of it.”

Kush will even resort to stealing from the till at Ruby’s club. She knows what he did and gives him the opportunity to return the money. However, he denies stealing, so she ends up telling the Slaters what he has done.

Meanwhile, Kush sits down to play poker with the Panesars. Stacey and Jean Slater (Gillian Wright) end up rushing to see if they can stop him. It is teased that Kush will fall into Suki’s trap and the Slaters could end up losing everything.