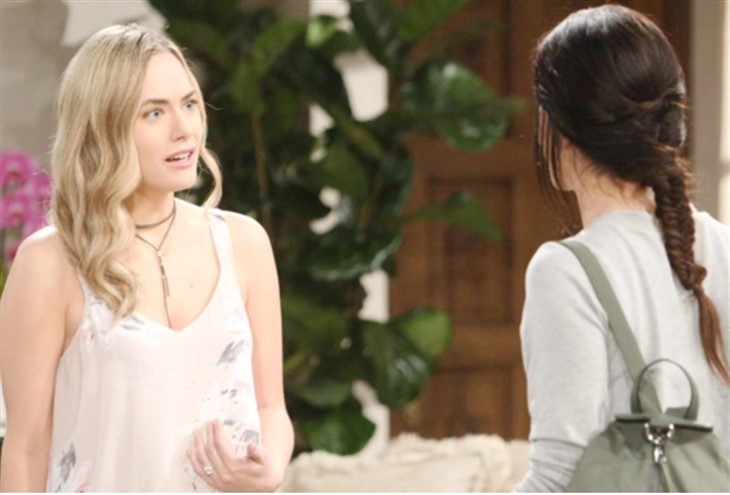 The Bold and the Beautiful spoilers document that Steffy Forrester (Jacqueline MacInnes Wood) is falling in love. But that doesn’t lessen her instincts where Hope Spencer’s (Annika Noelle) actions are concerned.

Liam Spencer (Scott Clifton) just offered a heartfelt apology, of sorts, to John Finnegan (Tanner Novlan) in front of Steffy at the cliff house. While Clifton’s character stands firm in his belief that Finn was caring for Steffy while in a compromised personal position, he acknowledged all the good he’s done for her and Kelly Spencer (Avalon and Colette Gray).

However, as Steffy fans, in particular, have seen she’s truly halted thoughts of Liam and has made Finn number one in her life. The natural storyline that B&B is presenting is completely believable and also feels good.

Making their blended family work was a goal that Hope and Steffy agreed on awhile ago. All had gone well in that regard until Steffy developed what became a brief pain-killer addiction.

With the knife-pull behind her, a recovering Steffy is basically back to herself again. With that status, she sees what Hope’s advice to Liam is actually about and is alright with it.

Hope wants Liam to accept Finn because doing so is part of an unspoken hope to keep Steffy in her new relationship. Plus, Liam’s pull-back from Steffy’s life will allow him to focus on Lope’s family time, which includes their daughter, Beth Spencer (Madeline Valdez, and River Davidson), and Douglas Forrester (Henry Saimiri). Of course, Kelly is welcome as well, but Steffy is best left with Finn.

The Bold And The Beautiful Spoilers – Potential Couple’s Nights Out?

Actually, it would be two families going out together. Projecting Finn toward a full Steffy link would mean that he marries her and they eventually have their own child or children. Fans can easily picture that group, which includes Kelly, meeting Lope’s family, with whatever size it is in the near future, on the beach that’s down below the cliff house, or investigating the landscape around the cabin, among other adventures.

The Bold and The Beautiful Spoilers and Rumors: Thomas Kidnaps Brooke After She Finds 'Hope' Doll #TheBoldandTheBeautiful #SoapOperas #CelebratingTheSoaps https://t.co/03vzP53K7E

Daytime is about drama. So, fans understand that these couples aren’t going to be swimming smoothly. Instead, the original battle between Steffy and Hope for Liam appears to be evolving into a more challenging scenario that surely will prove intriguing going forward.