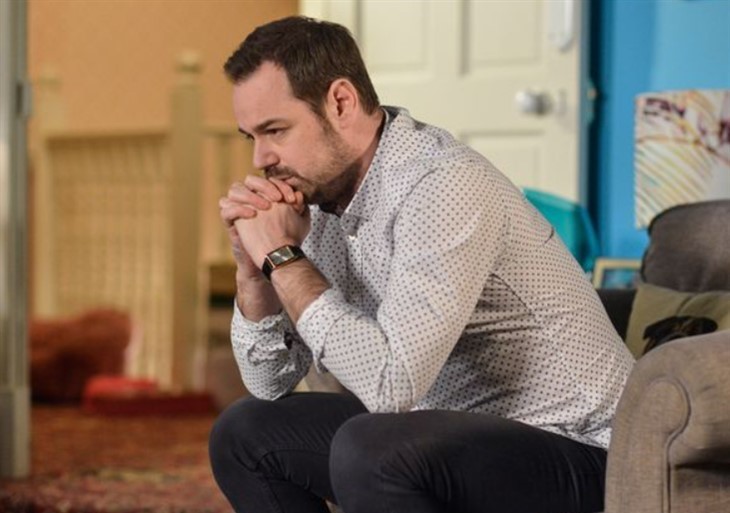 Eastenders spoilers reveal that Mick Carter (Danny Dyer) has been struggling during the past few weeks. He was stunned by Frankie Lewis (Rose Ayling-Ellis) claiming that Mick was her father. Then, Katy Lewis (Simone Lahbib) came to Walford and immediately began messing with Mick’s head. He’s decided to stay with his son for a while, but will he ever come back?

During the hiatus, Dyer teased that his character was going to have a huge storyline. He was excited about it and said it was probably the best story he’s ever had on the soap. That was saying quite a bit considering how long Dyer has played Mick Carter. The character has been given a lot of huge plots during the years, but the childhood sexual abuse story was completely unexpected.

When Frankie explained why she was so interested in Mick’s family, he was stunned. It brought back memories from his childhood and it hasn’t been easy for him.

Eastenders spoilers reveal that Katy arrived in Walford and claimed that Frankie was not Mick’s daughter. She tried to convince him that there was no sexual abuse. She turned the guilt back onto him by saying how he was destroying her life by saying such things. Now, this is a common tactic for abusers to deflect, reassign blame, and gaslight victims. Unfortunately, it is very effective and Mick struggled to figure out if his memories were even accurate.

On the November 12 episode, Mick finally reached his point of mental and emotional exhaustion. He told Tina Carter (Luisa Bradshaw-White) that he was leaving Walford to stay with his son for a little while. He needs time to himself to think and process everything.

Mick’s family doesn’t know what is really bothering him. Tina assumes that he is having a difficult time not owning The Vic anymore. Viewers were waiting for him to admit what’s really going on, but he never did reveal the truth.

#Eastenders Spoilers: Mick Abused All Over Again, Katy Gaslights Him Into Silence https://t.co/772YgCcnd7

There is no word on how long Mick will stay with Lee Carter (Danny Hatchard). However, we do expect Mick to return and his absence probably won’t be for very long. Will the time away help give him mental clarity about the sexual abuse situation? Will he finally talk to his loved ones about what happened to him and how much he’s struggling? If he keeps it bottled up inside, it will only end up destroying him.

The Bold and The Beautiful Spoilers: Brad Bell Spills The Tea About Thomas And His Controversial Hope Doll