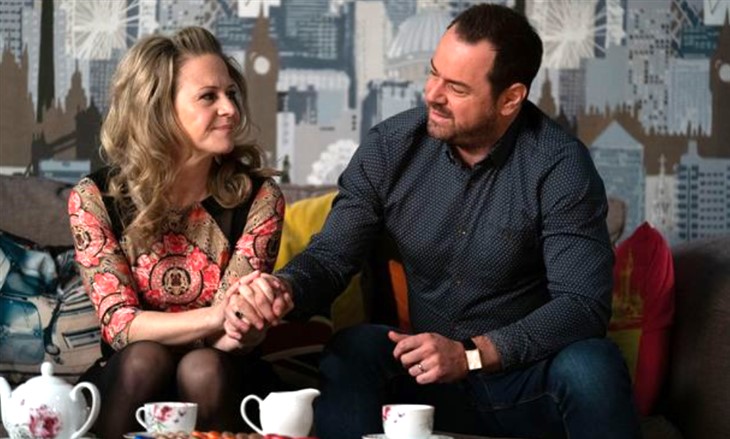 BBC Eastenders spoilers reveal that Mick Carter (Danny Dyer) and Linda Carter (Kellie Bright) will be tested when the soap returns. However, it might be more serious than we thought. The couple hides secrets from each other and it creates a rift. Then, a newcomer shows interest and it is teased that the couple would be ultimately destroyed.

EastEnders Spoilers – Keeping Secrets From Each Other

According to the Sun, Mick has a big secret that he is keeping from his wife. However, he isn’t the only one covering up the truth. Linda is also keeping something from the man she loves. They aren’t being honest with each other and it starts to create a divide between them. What could Mick and Linda’s secrets possibly be?

It is teased that keeping the secrets will be harder than they think. Over time, they have to keep telling more lies to prevent the truth from coming out. It will start to affect the couple’s relationship and it is speculated that if Mick and Linda don’t confess and tell each other the truth, then those secrets and lies could end up destroying their marriage.

Eastenders spoilers reveal that the secrets and lies might not be the only problem for the couple. The publication explained that there is a new face in Walford and this individual takes an interest in one of the Carter family members. Now, with Mick and Carter’s marriage already on shaky ground, could this new character destroy the marriage to the point where it cannot be fixed?

In a segment of Secrets From the Square, Danny Dyer had teased that he is getting the best storyline that he’s had since he came on board. This says a lot because the actor has had all kinds of different plots. Plus, the couple hoped that selling Queen Vic and moving out to help Linda stay sober would end their problems. But it seems that another one is just around the corner. Kellie Bright said that the couple would be tested.

What do you think Mick and Linda are keeping from each other? What happens when the newcomer shows an interest in one of them? Will their marriage survive or has the couple simply been through too much? We will find out when the soap returns on September 7.