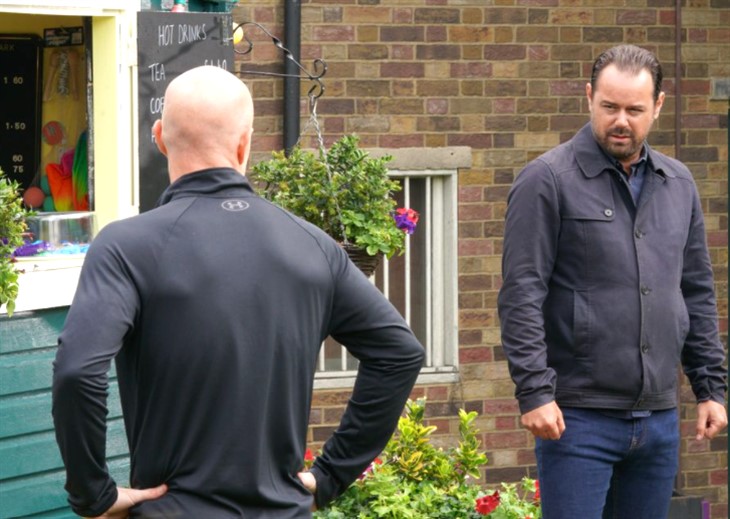 Eastenders spoilers reveal that after cheating on Mick Carter (Danny Dyer), Max Branning (Jake Wood) wastes no time in telling Linda Carter (Kellie Bright) to end her marriage. She goes home and expects her husband to say something about her being gone all night, but he never does. As Linda takes too long to tell Mick it’s over, Max takes matters into his own hands.

The night that the soap returned from hiatus, we saw Linda struggle with her addiction. Mick didn’t see her take a drink, but Max did. Later, the two talked and bonded, then shared a kiss. Even though Linda was feeling guilty about it, fans have watched as Mick’s childhood trauma is having him push his wife away. Max and Linda sleep together and the next morning, Max instructs her to end her marriage.

Mick Carter Has No Reaction

Eastenders spoilers reveal that Linda goes home and tries to come up with the courage to tell her husband the truth. However, he makes no issue of her being gone all night. In fact, he doesn’t even mention it and she assumes that he doesn’t care. It’s the opposite though, Mick is heartbroken that Linda slept with another man, but knows that he pushed her away. Unable to tell her what’s really going on, Linda does make a decision about her future. However, she’s not ready to tell Mick that she’s dumping him for Max.

Not waiting around for Linda to tell Mick the truth, Max decides to do it for her. Without even warning her about his plans, he goes up to Mick and tells him that he had a night of passion with his wife. Of course, he already knows this but is paralyzed and unable to really react. He is too consumed with his childhood trauma of being sexually abused. He’s also dealing with his abuser continuing to manipulate him all these years later.

It is teased that Linda will make a decision about her future and she seemingly seals her fate. However, as she finally makes a choice, she will learn some alarming truth bombs. Could Mick’s abuse be one of those? If so, will it be too late for her to undo the damage inflicted on the marriage?

The Carters have been through a lot in the years they have been together. Some of those storylines thought to destroy the couple had a happy ending. But sometimes just too much happens that make reconciliation impossible. It is teased by the soap that Linda won’t be able to come back from her decision, but is it really over for their marriage? Or can they find their way back to each other?