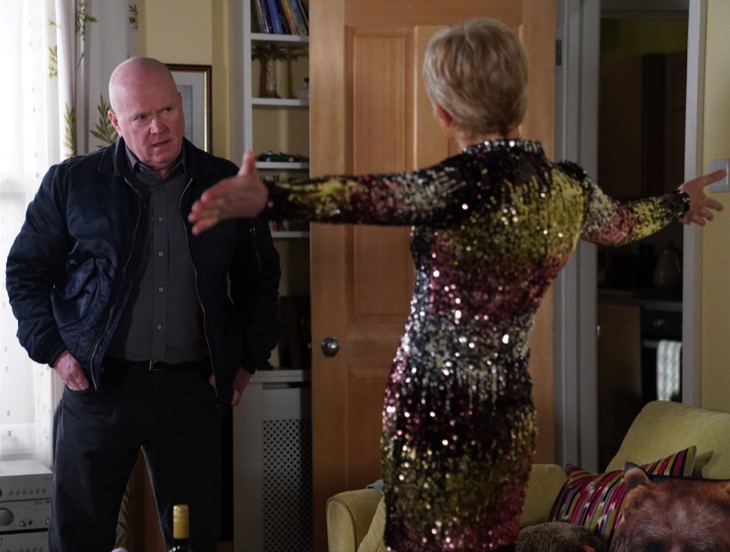 BBC EastEnders spoilers and updates hint that Jean Slater may be trying to be bringing her daughter back with her newest plan. Jean Slater has been going on a downward path, and it seems that it may get worse in upcoming episodes as she decides that she needs to bring back Stacy. She will decide to do that by seducing Phil Mitchell. How might this play out?

Jean Slater will be trying to bring her daughter back in the upcoming episodes of EastEnders. Recently, Jean has been off of the meds that help her manage bipolar disorder. Her strange behavior began recently as she began to think that Whitley was Stacy when she was kidnapped. Stacy has been off-screen since the summer of last year after an incident involving Phil Michell.

Stacy decided to flee Walford along with her husband, Martin after they attacked Phil Michell in self-defense. However, them leaving town may have been for nothing as Phil had no idea that Stacey was even involved and blames Kat for everything that happened. However, this will not stop Jean who is not in a good state, to approach Phil about the issue.

In upcoming scenes, something that Shirley says will set Jean to take action. As Shirley will say, that seduction is the only way to get through to a man like Phil. This leads to Jean to don a sparkly dress, and she will head over to Phil’s place. When he sees her there, he will become confused to hear her mention Stacey and to see her turn on the charm towards him. This sets up the question to if this new storyline could mean that Stacey could find her way back to Walford.

Did you guess right? Look's like they got it wrong… #EastEnders pic.twitter.com/NiOxdyBuMZ

As of right now, Lacey Turner, who plays Stacey, is on maternity leave after she gave birth to her first child last year. The production of EastEnders is also on hold at this moment but is set to start back in June. What do you think? Will Stacey return for this storyline? Could her return help Jean get back on track with her mental health?