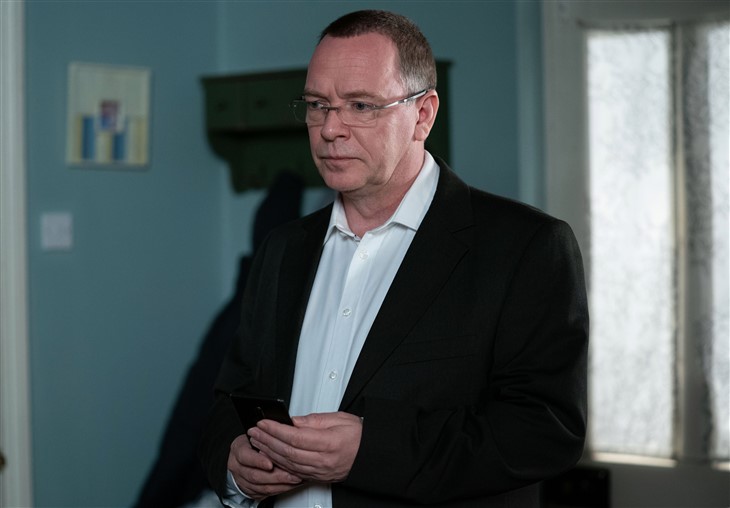 BBC Eastenders spoilers reveal that we have two big spoilers to share, courtesy of two separate segments of Secrets From the Square. As previously reported, Ian Beale (Adam Woodyatt) will have money trouble due to the lockdown. He will also clean out Max Branning (Jake Wood) financially in a business betrayal storyline. These two plots will end up interweaving together.

As fans recall, Woodyatt appeared in a previous episode of Secrets From the Square. He talked about buying Queen Vic for Sharon. There were a few different reasons why he did this.

First, he has a lot of guilt over his role in the death of Sharon’s oldest son, something which she has no idea of yet. The other was a way to impress Sharon and continue to be close to her. Even though she only likes him as a friend, Ian has feelings for his former flame. Then, there was the bonus of getting one over on Phil Mitchell (Steve Mitchell).

Eastenders spoilers reveal that Ian will go through some financial distress after buying Queen Vic. It was a huge investment and of course, Ian never anticipated that the pandemic would initiate a lockdown. So, expenses remain but there has been no income coming in. It seems that might be what prompts Ian to commit a new betrayal.

In a more recent segment of Secrets From the Square, Wood appeared to talk about his character, Max. The actor said that Max would end up being completely betrayed by Ian. He signed over half his restaurant to Ian in order to prevent his ex-wife from getting that part of the money in the divorce. However, he ends up getting cleaned out when Ian steals every cent he has.

Obviously, Ian was in financial distress and resorted to taking all of Max’s money in order to keep his own head afloat.

It seems that Ian’s desperation will have him commit more crimes. Now, there is his part in Dennis Mitchell’s (Bleu Landau) death. Then, there will be fraud and theft. What’s next? Could Ian deal with Dotty Cotton (Millie Zero) by doing something to silence her?

Could Ian end up committing murder in order to keep Sharon from finding out the truth? It certainly is possible. To find out, we will have to wait for the soap to return in September 2020.