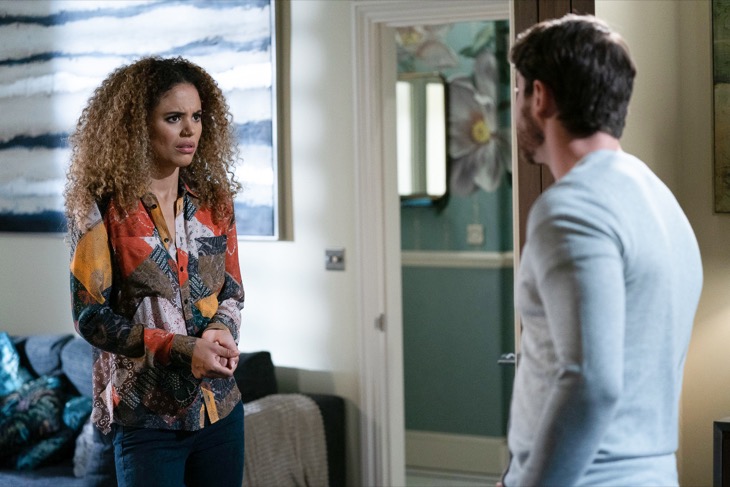 BBC Eastenders spoilers reveal that it will be a few months before new episodes of the soap return to the air. However, photos have been released of the cast back on set. Fans believe they spotted a clue that suggests Gray Atkins (Toby-Alexander Smith) kills his wife during the lockdown. Keep reading to find out more about what could happen when the show comes back on the air.

For months, fans have watched in horror as Gray has been abusing Chantelle Atkins (Jessica Plummer) in every way possible. Physical, emotional, mental, by manipulation and control, and she was even the victim of reproductive abuse (which actually is a real term). Gray also sexually assaulted Chantelle at one point. There was the time when he beat her so brutally that fans thought she was dead. The young woman survived but was barely able to stand up.

Eastenders spoilers reveal that Gray is losing control. He has begun putting trackers in the car. He believes that she has been having an affair and won’t even look at proof that she was at the dentist’s. Dotty Cotton (Millie Zero) accused him of being the jealous type, and interestingly enough, Suki Panesar (Balvinder Sopal) used those exact same words.

It is a fact that domestic abuse gets worse during lockdown. So, it wouldn’t be a surprise if Gray’s temper got out of control while they are quarantined. However, fans believe that they have discovered a clue. Discussing the storyline on Walford Web (per The Sun), one viewer had this to say, “I also don’t see Chantelle leaving Gray and him just going to prison or coming back for some revenge plot which sees him die as it’s all been done before.”

Karen Taylor Has Dark Story Ahead

Eastenders spoilers also state that Karen Taylor (Lorraine Stanley) has a dark story coming up. She recently lost the baby she was caring for as her own, Kayden Watts. Sharon Watts (Letitia Dean) ended up coming back and retrieving the baby. So, some viewers think the story has to do with that. However, it could also be referring to Chantelle.

“More convinced Chantelle is a goner! The actress got new headshots and we all know what that means… Lorraine Stanley is saying Karen has a dark story coming up.”

Do you think Gray Atkins kills his wife during lockdown? How will he explain her disappearance? People just aren’t going to accept that Chantelle Atkins disappeared. We will just have to wait for new episodes to air in order to find out.