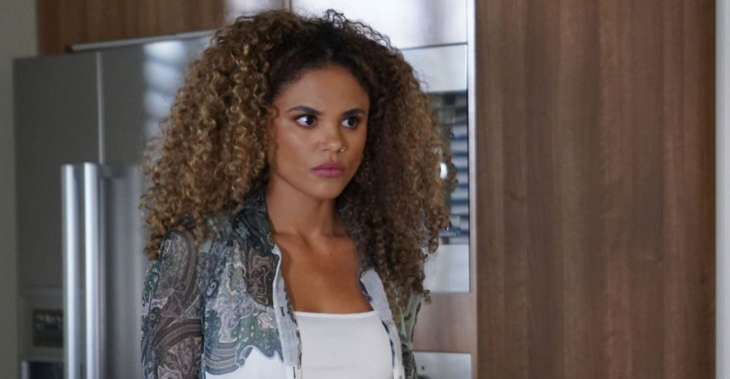 BBC Eastenders spoilers and updates reveal that Chantelle Atkins (Jessica Plummer) is desperate to prove to her husband that she’s innocent. She is not having an affair and didn’t take the car the previous Thursday. The abused wife tries to show Gray Atkins (Toby-Alexander Smith) proof she was at the dentist when the car was taken. However, she refuses to believe it. This could end badly.

As fans recall from last week, Chantelle was accused of taking the car without asking Gray’s permission. He thinks she has been sneaking off to have an affair because the tracker in the vehicle shows it was taken the previous week. Of course, it wasn’t Chantelle, but Ben Mitchell (Max Bowden). Even though Chantelle insists that it wasn’t her, Gray is convinced that she is lying to him.

Eastenders spoilers from Digital Spy reveal that Chantelle knows what could happen if she can’t prove her innocence. To avoid another beating, she finds proof that she was at the dentist on the day and time that the car was taken. She shows it to Gray to prove she is telling the truth. However, her efforts are pointless because nothing is going to change Gray’s mind at this point.

Even though Chantelle can prove she was at the dentist, Gray doesn’t believe it. Despite the evidence supporting her innocence, Gray insists that it’s just another lie. It seems that Chantelle is fighting a losing battle. In fact, there is a chance that Gray could become infuriated again because he thinks he is being lied to again.

Will This Be The Breaking Point?

Even though fans wonder if the breaking point will come soon, this storyline will carry on a while longer. In a previous interview, Smith explained that abuse happens gradually and over a long period of time. This is what they are trying to convey with Gray and Chantelle’s story. However, how much worse will things get, and could it lead to tragic consequences?

What do you think is going to happen with Gray and Chantelle in the next few months? Will there come a point in which they will find out that it was Ben that took the car? By the time that happens, will it be too late for Chantelle? We will have to keep watching the soap to see how this storyline ends and if Chantelle will ever get her freedom.