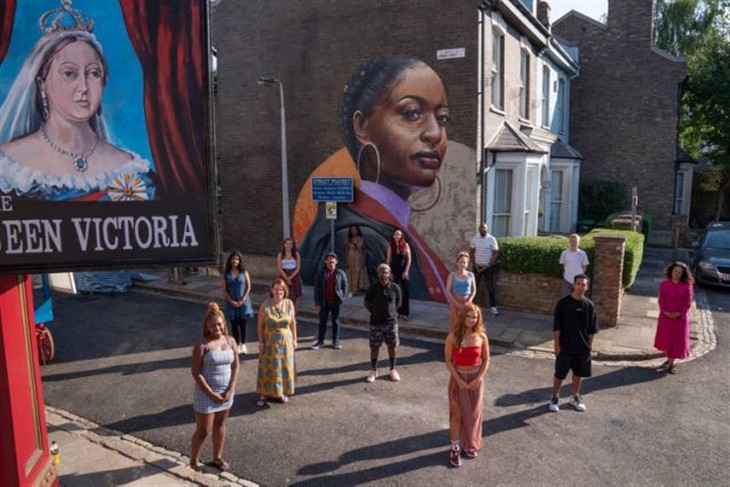 BBC EastEnders spoilers and updates reveal that the iconic BBC show has added a larger than life mural to its fictional setting, Albert Square.

Showrunners reportedly wished to reflect contemporary Britain with the work which was created by the visual artist Dreph, a Nottingham-born Ghanaian.

When the legendary sudser returns with new episodes, they will see a 5m x 2m portrait of a striking black woman on the wall across from the Queen Vic pub.

Executive producer Jon Sen stated that the artwork is a “timely addition… that reflects events taking place in the real world.”

Dreph was born Neequaye Dsane, and described his work being a part of the show as, “a really exciting opportunity.” It took several days to perfect the art which is on the sidewall of the Beale family’s house. The artwork is a relatively huge 5×2 meters, and it was finished prior to the return of the cast and crew coming back to work on Monday, June 29.

According to Dreph he still remembers watching his first EastEnders episode 30 ago so and says he was stunned to be contacted by the show.

“I’m so pleased that EastEnders has found a way to reflect the modern-day UK in a time when so many of us are finding ways to voice anti-racism,” he stated.

Dreph has painted large-scale murals around the world. His artwork often recognizes and pays tribute to unsung heroes and heroines.

According to Sen, “Anti-racism is something that the cast, crew, and producers care passionately about at EastEnders and the show is well known for tackling social issues and celebrating diversity and inclusivity through its characters and storylines.”

Showrunners have said that the impressive mural will feature as a backdrop to several storylines as the soap ramps up production.

What Can Viewers Expect Now That The Show Is Back To Filming?

In March the dangerous and deadly coronavirus pandemic stopped production on all UK as well as American soaps. EastEnders ran out of original episodes in June and has since taken to airing flashback shows as well as a new spin-off with Stacey Dooley. The show is titled Secrets of the Square and offers a behind-the-scenes look at the show.

Days Of Our Lives Spoilers: Claire Under Fire, But Wedding Arson Story Has Twist