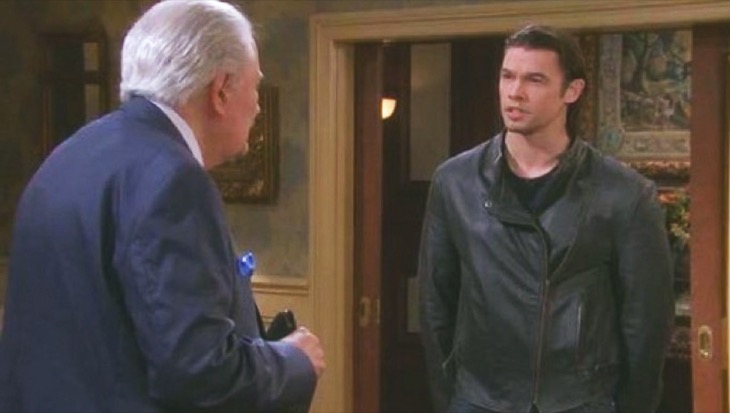 NBC Days of Our Lives spoilers and updates reveal what we can expect from Xander Cook Kiriakis (Paul Telfer) this summer. The actor also explained why the villain agrees to do Victor Kiriakis’ (John Aniston) dirty work, despite the fact that the patriarch treats his nephew horribly. Keep reading to find out what the soap star had to say, including Xander wanting everything Victor has.

DOOL spoilers reveal that when speaking to SoapCentral, Telfer explained that Victor’s made a huge impact on Xander. However, there are still some things Salem’s bad boy needs to learn. For one, Victor never apologizes for anything he does and to him, it doesn’t matter if he is right or wrong. He just moves forward knowing that he does whatever is necessary to protect himself and his family. Telfer also explained that Xander isn’t confident or insecure like his uncle Vic.

The one trait that Victor and Xander share is their drive, but their motivations are quite different. Victor is all about protecting his family. For Xander, he always has selfish motivations that cause him to sabotage himself. We have already seen this happen with the woman he loves. No matter how he justifies his behavior, it is ultimately done for very selfish reasons.

Days of Our Lives spoilers reveal that the two already have a complicated relationship. However, as time goes on, we will see it become increasingly twisted but their similarities will bind them at the same time.

“It does feel like the writers have worked relatively hard to set up Xander as a ‘proto-Victor.’ He’s the black sheep of the family, but in a lot of ways, he’s the most similar to Victor. Victor treats him awfully, but maybe on par with the way Xander’s recklessness and immorality reminds Victor of himself, and maybe he’s not comfortable with that.”

Days of Our Lives Spoilers: What Xander Cook Kiriakis Wants

One question that Telfer was asked is why does Xander continue to do Victor’s dirty work when he’s not treated well? The actor speculates that it might be because Xander doesn’t have anyone else. At least, until he fell in love with Sarah Horton (Linsey Godfrey) and bonded with Maggie Horton Kiriakis (Suzanne Rogers).

However, there might be another reason for Xander always going along with Victor’s schemes. Telfer said that Xander wants everything that Victor has. Not to take it away from the patriarch, but more of a life goal of who he wants to be one day.