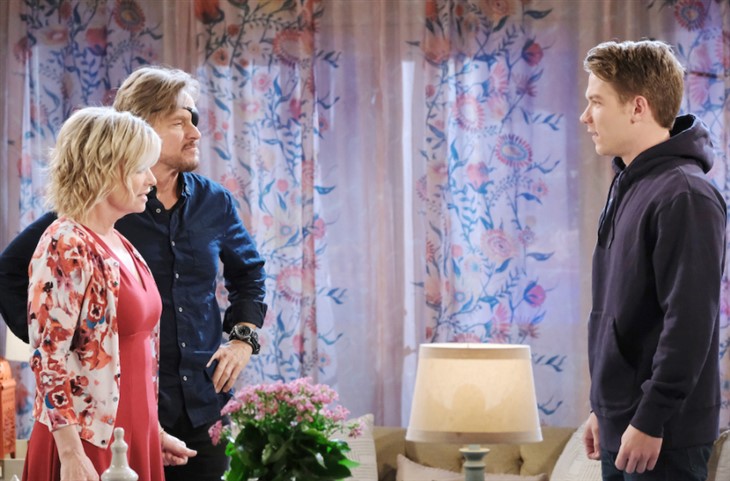 Days of Our Lives spoilers reveal that Tripp Dalton (Lucas Adams) is ripping apart Steve Johnson (Stephen Nichols) and Kayla Brady’s relationship. Some “Stayla” fans are concerned that the two might even break up for good. However, actress Mary Beth Evans recently shared some uplifting news, which suggests they will get through this ordeal.

DOOL spoilers reveal that after the time jump, viewers tuned in to find that Kayla had moved on with Justin Kiriakis (Wally Kurth). Steve thought he was Stefano DiMera (previously played by the late Joseph Mascolo). Eventually, Steve was back to himself and Justin gave his fiancée a way out before she said “I do.” She ended up choosing Steve, the man she has always ended up with before.

Now that “Stayla” is back together, the couple faces another conflict, which has to do with Tripp and Allie Horton (Lindsay Arnold).

The whole situation with Allie accusing Tripp of rape keeps getting more and more complicated. He still insists that they never did anything and there is no way he could be the father of Henry Horton (Jayna and Kinsley Fox). However, Kayla ran the DNA test four times and the results were always the same. He shares similar DNA to the baby. Now, this doesn’t confirm he is the father, just that he’s closely related.

But with no other male family members besides Steve, Tripp is going to find it nearly impossible to prove his innocence. At least until another relative is discovered in the near future.

Days of Our Lives spoilers reveal that the tension between Steve and Kayla is getting worse by the day. The doctor is at the point where she might be wondering if she can stay with Steve as long as he keeps defending Tripp. While some fans are worried about “Stayla,” actress Mary Beth Evans gave some good news.

The actress told Soap Opera Digest that there is hope for a happy ending. She said, “They both love Joey [Johnson, James Lastovic] to death, so that’s a common thing for them, where the Tripp situation is separating them. They get a small reprieve to love up Joey, and then they’re back at the Tripp problem. So, they’re still in the mix about it. This is a divide, but they are a family and true love usually prevails for them.”