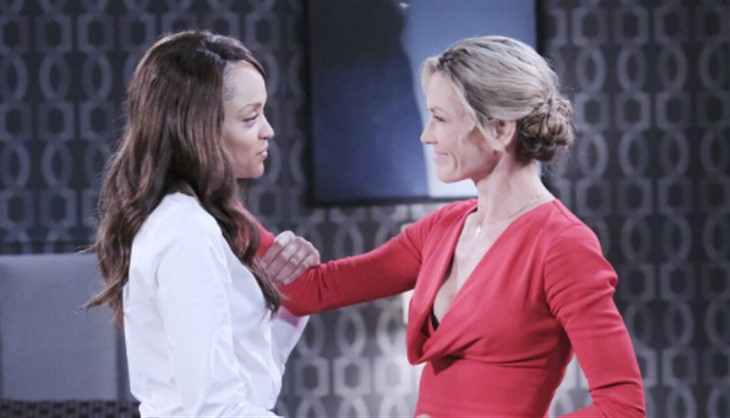 NBC Days of Our Lives spoilers reveal that DA Melinda Trask (Tina Huang) is determined to make sure that Kristen DiMera (Stacy Haiduk) goes to prison. When she starts poking her nose into every aspect of the case, she will likely find out about Lani Price Grant (Sal Stowers) helping Kristen escape. Could Lani end up facing legal consequences for helping a wanted woman?

Days Of Our Lives Spoilers – Kristen DiMera Has Weak Case

DOOL spoilers reveal that Lani is worried about her best friend, who was on the run and has now been arrested. The detective who put Kristen in handcuffs was none other than Lani’s own husband, Eli Grant (Lamon Archey). Trying to reassure Lani, he says that Kristen’s case is actually really weak and there is a lot of information that never made it to the case files, such as the confession.

When Melinda walks into the room, Kristen is taken aback. That is the last person that she expected to see. Not only is Trask a no-nonsense prosecutor, but her daughter died at the hands of Kristen. So, there is a reason for the fugitive to be concerned. Melinda ends up making a promise to Kristen that she will make sure that no stone is left unturned. Trask plans on digging up every tiny piece of evidence there is in order to send Kristen away for good.

Days of Our Lives spoilers reveal that Lani should be just as worried as Kristen. Lani, who is also a police detective, violated the oath she took to uphold the law. Not only has she kept Kristen’s location secret and never reported her previous visit to Salem, but helped her escape. It put Eli in a really tough position. It put both of them at risk because Lani committed a crime by helping her friend.

Days Of Our Lives #DOOL Spoilers And Recap Monday, September 21 – Sami Continues To Push Allie; Belle Is Worried About Clairehttps://t.co/ryaOi6MzsK

The whole reason why Eli thinks that Kristen’s case is weak is because of the confession. It was made off-the-record and only told to Lani. Of course, she never put that information in the case file, so Trask doesn’t know about it. However, with her being so determined to take her down, could that confession eventually be discovered? Is it possible that Trask will not only stick it to Kristen but punish Eli and Lani, as well?