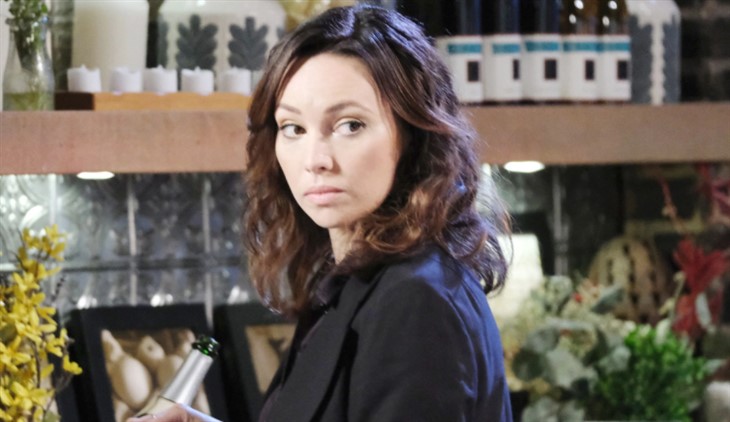 NBC Days of Our Lives spoilers tease that Gwen Riczech (Emily O’Brien) has some previous connection to Dr. Wilhelm Rolf, (William Utay), given she visits him in prison this week. In the extended Days of Our Lives preview, she greets him with a friendly “What’s up doc” and he smiles, seeming to recognize her! As a matter of fact, he appears to be very fond of her! What could their connection be?

Days Of Our Lives Spoilers – Could Gwen Be Getting Her Drugs From Rolf?

Of course, viewers knowing that Gwen was the culprit in trying to drug Chad DiMera (Billy Flynn) with Abigail DiMera (Marci Miller) drinking from the glass instead. Gabi Hernandez (Camila Banus) was blamed at first, since she seemed to have had motive, means, and opportunity. However, this time she actually was innocent. Abby spent months in treatment in Florida for the psychotic symptoms she suffered after drinking the drugged champagne.

Considering Rolf is famous for all kinds of drugs, brainwashing devices, brain chips, lifelike rubber masks, and the like, it wouldn’t surprise anyone if she got them from Rolf. But the big question is, where do they know each other from? We know the two of them can’t be connected through Gwen being related to the DiMeras, considering she and Jake Lambert (Brandon Barash) were sexually involved.

That would be simply gross, and Days of Our Lives showrunners simply wouldn’t go THERE. However, going back to that apparent fondness that Gwen and Rolf have for one another, and their familiarity with each other, could Rolf and Gwen be related somehow? It’s possible, even though Rolf is German and Gwen speaks with a British accent. Rolf’s been around, he could have very well sown some wild oats in his time! However, there are some other possibilities besides Gwen being Rolf’s love child. It does seem probable he’s her psychosis-causing drugs supplier, however!

Could Rolf Have Known Gwen As A Child?

It is also possible that Rolf could have known Gwen as a child – possibly one of her parents could have been close to Rolf. Another person to consider that we know is connected to Rolf, although he only recently surfaced in Salem, is Vincent Belman (Michael Teh). He is said to be a “protégé” of Rolf, although there were never any storylines referring to any “protégés”, other than Rex Brady (Kyle Lowder) having studied with him. Strangely enough, Vincent too has a little bit of a British accent – although not anywhere as pronounced as Gwen’s!

They have different last names but they do have Rolf and using mind-altering drugs on people in common! We know Vincent has been in Salem or in the area for a while, since he was engaged to Wendy Taylor (Denice Duff) and took vengeance on Ben Weston (Robert Scott Wilson), her killer, and kidnapped Ciara Brady Weston (Victoria Konefal).

Gwen appeared about the same time, although she was hiding out from the mob figures that Jake was running from. Rolf had a brother named Helmut, and a niece named Marlo Ungerschterner, both deceased. Assumably, Helmut was Margo’s father, and Margo was the mother of the baby swapped with Zack Brady (Alyssa and Lauren Libby – as an infant), JT Brady.

Days Of Our Lives Spoilers: Emily O’Brien Talks Being Back And Better Than Ever Before https://t.co/wUPicd6Zdd pic.twitter.com/PNFUTy7h7U

Stefano DiMera (Joseph Mascolo) had arranged for the swap. It is doubtful that Gwen could be connected through Marlo unless she was born before JT. Could Gwen be connected to Rolf through Vincent? Could they be siblings? That is a possibility but where is Rolf’s obvious fondness coming from? Longtime Days of Our Lives viewers know that storylines occasionally are recycled or retooled – for instance, there have been many baby swaps throughout the years, but then that is a standard soap opera trope.

Ben and Ciara’s relationship seemed to mirror Ciara’s parents’, Hope Williams (Kristian Alfonso) from the good upstanding family getting involved with the bad boy Beauregard “Bo” Brady (originally Peter Reckell) and causing family drama. Rolf once had a right-hand man who he was very fond of, and although no historical storylines show him ever having been married or even serious with anyone – although he did once have a flirtation with Bonnie Lockhart (Judi Evans) – anything’s possible. Could the late Bart Beiderbecke (Steve Blackwood) fathered possibly both Gwen and Vincent, and Rolf have known them as children?

They could either have had different fathers with each having their mothers’ last names, although that’s doubtful with bashful Bart, or they could be twins and separated at birth. Rolf could have kept track of both over the years if they were adopted and possibly made it a point to be in their lives as they grew up.