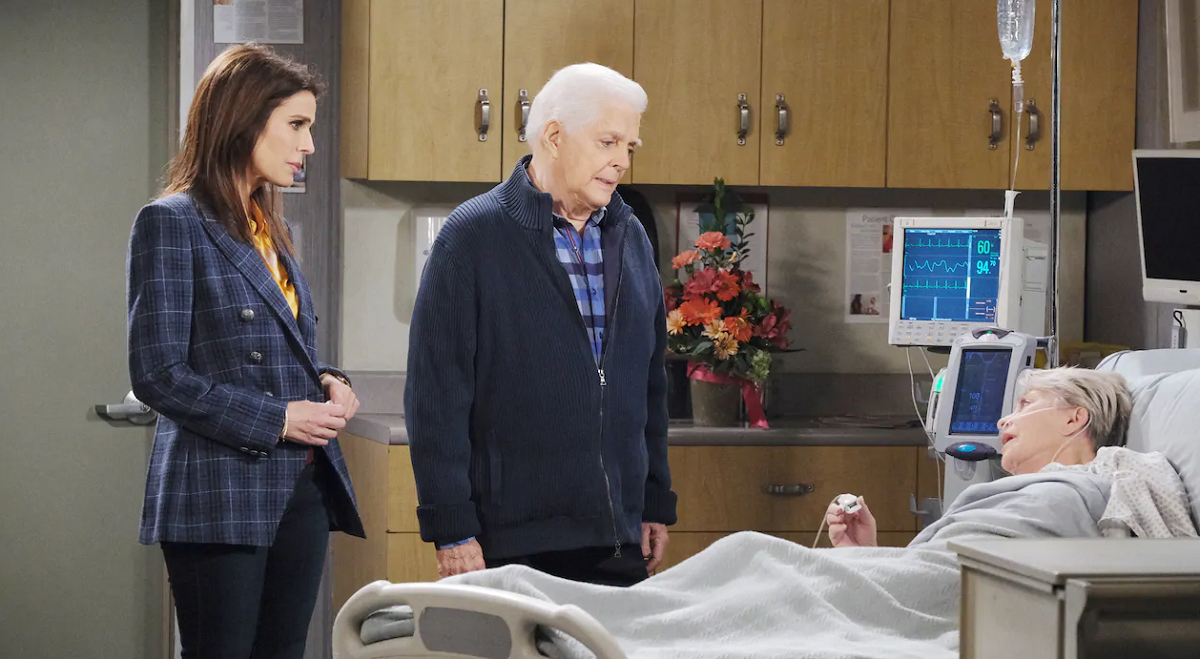 Days of Our Lives spoilers for February Sweeps confirms there is an unexpected death. It affects the family of Doug Williams (Bill Hayes) and as a result, it will cause him to reminisce about when he came to Salem 50 years before. Who could the person be who meets their demise? Is this a character that we know well, or could be someone off the canvas? Keep reading to get our theories on this storyline.

DOOL spoilers from Ron Carlivati tease not only an unexpected death, but it will tie in with actor Bill Hayes celebrating 50 years on the soap. The head writer talked to Soap Opera Digest about the upcoming storyline.

“We found a way in [to honor Doug Williams/Bill Hayes] by there is an unexpected death in the family that has an impact on Doug and causes him to reminisce about when he first came to town. I don’t want to give away too much, but there will be a very nice day that honors him.”

Maggie Horton (Suzanne Rogers) has been getting a ton of screen time lately. It will also be devastating when she finds out that there has been a baby swap. Xander Cook Kiriakis (Paul Telfer) did it to prevent Sarah Horton (Linsey Godfrey) from dealing with the agony of losing her baby.

However, Victor Kiriakis (John Aniston) ordered it be done due to Maggie. It would kill her if she learned that she killed her own granddaughter.

Days of Our Lives spoilers indicate that Julie Williams (Susan Seaforth Hayes) could be the one to die. Right now, she has a pacemaker which is keeping her heartbeat regular. However, there is a huge storyline involving Gabi Hernandez (Camila Banus) threatening to kill Julie if Lani Price (Sal Stowers) doesn’t obey orders. After everything Lani has gone through, we don’t think the writers would kill Julie, but you never know.

Days Of Our Lives For Spoilers For February 3 to February 7: Ciara, Clyde And Will Try To Help Ben https://t.co/OCKowctd81 pic.twitter.com/gWxDEBcLP5

It is teased that JJ Deveraux (Casey Moss) might be the one to pass away. The actor is reportedly leaving the soap, although we don’t know when or how yet.

The other possibilities are that Doug himself passes away, leading to this walk down memory lane. The last option is that it is someone of the canvas, perhaps a character we have never met. To find out who ends up losing their life, keep watching the NBC soap opera.

Days Of Our Lives Spoilers: Wendy Catches Alex Leaving Allie’s Room, Did She Cheat On…

Days Of Our Lives Spoilers: Nicole And Sloan Face Off