Days Of Our Lives Spoilers: Trask Threatens To Prosecute Lani, Eli Backed Into A Corner 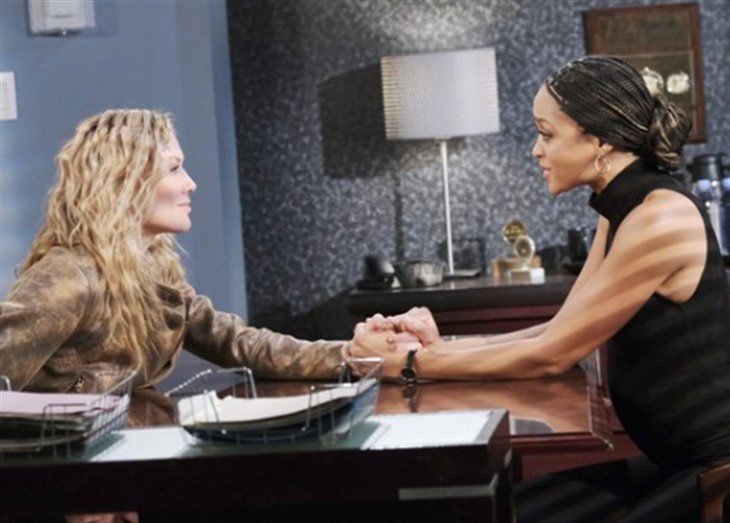 Days of Our Lives spoilers for the week of October 5 reveal that DA Melinda Trask (Tina Huang) will do anything to nail Kristen DiMera (Stacy Haiduk). This includes sending a pregnant detective to prison. She tells Eli Grant (Lamon Archey) that he better get her evidence that will convict Kristen or she’ll prosecute Lani Price Grant (Sal Stowers) for helping her BFF escape.

DOOL spoilers reveal that Trask will continue trying to uncover evidence that will make sure she gets a conviction in court. She is determined to send Kristen to prison for stabbing Victor Kiriakis (John Aniston), even though her real agenda is getting justice for her daughter’s death. She will continue pressuring Eli to help her, but he promised Lani that he wouldn’t do anything to jeopardize Kristen’s freedom. However, it seems that Trask already knows too much.

After talking to Mayor Abe Carver (James Reynolds), he lets a tiny piece of information slip, and Trask catches it. She goes straight to Eli and makes a threat against his wife. Trask tells Eli that he either gets her evidence that will send Kristen to prison or she’ll prosecute Lani. As fans recall, many months ago, Lani helped Kristen escape and she paid no consequences for that. So, it’s going to come back and haunt her and Eli doesn’t know if he can protect her.

Days of Our Lives spoilers reveal that Eli will give his wife a warning. That even though he initially said the case against Kristen was weak, Trask isn’t giving up. He will tell Lani that her past could come back with a vengeance and Kristen’s head won’t be the only one on the chopping block. However, knowing how committed Lani is to her BFF, she will likely keep asking Eli not to give Trask any ammunition.

This leads Eli to go to an unexpected person for assistance. He pays a visit to Kristen and begs for her help. Will she come up with an idea to stop Lani from being prosecuted and protect herself too? Perhaps fake evidence that will fool Trask but be exposed as false in court, leading to Kristen getting off? Or will Kristen go ahead and serve the time in order to protect Lani?