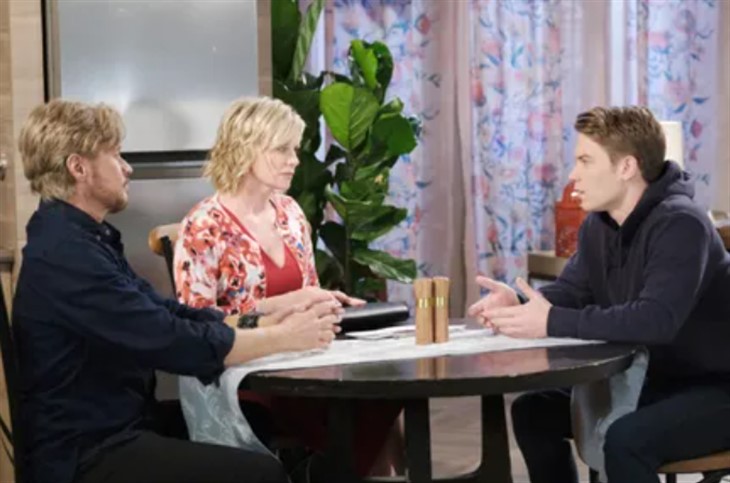 Days of Our Lives (DOOL) spoilers for next week, October 5, reveal that Steve “Patch” Johnson (Stephen Nichols) and Dr. Kayla Brady (Mary Beth Evans) react to shocking news. Allie Horton (Lindsay Arnold) accuses Tripp Dalton (Lucas Adams) of rape and files a police report. Tripp will be investigated and questioned about his time in London. Can “Stayla” find out the truth?

DOOL spoilers reveal that Allie bumps into Tripp and has an unexpected reaction. Even though she remembers Tripp from London, she doesn’t understand why she is being so hostile to him. It’s not until she goes home and confides in Nicole Walker Brady (Arianne Zucker). Nicole helps Allie go back to that fateful night and it is then that she remembers that Tripp raped her.

It is confirmed that Nicole promises Allie that she won’t have to go through this alone. They go to the Salem Police Department and file a report. Detective Lani Price Grant (Sal Stowers) is the one who gets Allie’s statement. Even though this happened several months ago and in another country, both the victim and alleged suspect are in Salem. So, Lani goes out to investigate and question the suspect.

Days Of Our Lives Spoilers: Tripp And Allie Met, But Is Evan Frears The Real Rapist? #DOOL #Days #DaysOfOurLives https://t.co/Yz9p26mvuh

Days of Our Lives spoilers reveal that Steve and Kayla are both shocked to hear about Allie’s accusation. Privately, Steve demands answers from his son. He believes Tripp’s version of the story, but also believes Allie was raped by someone. If not Tripp, then who was it and why does Allie think it was him. To get to the bottom of it, Steve needs to know the exact relationship Tripp and Allie had, as well as every move his son made that night.

Steve isn’t the only one who is in shock over the rape accusation. Kayla is also having a hard time picturing Tripp sexually assaulting someone. Tripp did have his evil moments, but it wasn’t because he was a bad kid, he was just filled with so much anger. And he has changed so much since then. He wants to dedicate his life to save people, not hurt them.

Of course, Allie’s accusation might bring up bad memories from Kayla’s own past. Could this affect their relationship? Is Tripp really guilty of rape? Or is there more to this story? We will have to keep watching the NBC soap opera to find out.