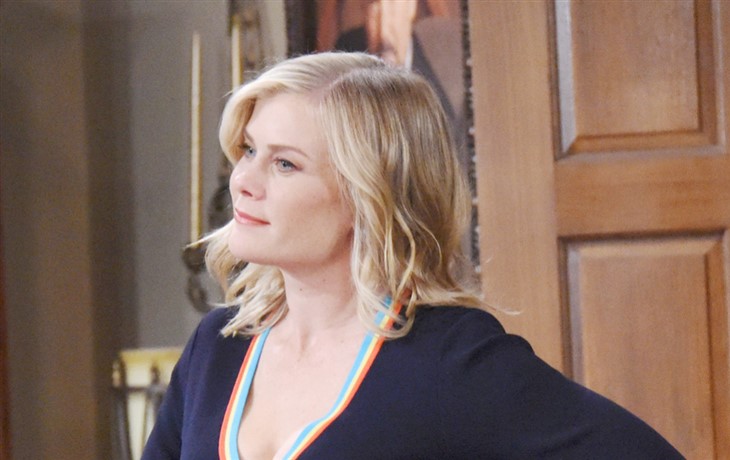 NBC Days of Our Lives spoilers reveal that Sami Brady (Alison Sweeney) thinks she finally has Baby Boy Horton. However, her scandalous custody scheme will be in jeopardy when Allie Horton (Lindsay Arnold) returns to Salem. After getting blasted by Allie for her actions, Sami panics and acts fast to keep custody of her grandson. What is the Salem schemer going to do now?

DOOL spoilers reveal that Sami pulled some deceptive moves to win custody of Allie’s baby. Allie’s letter specifically stated she wanted the child to go to Eric Brady (Greg Vaughan) and Nicole Walker Brady (Arianne Zucker). It also explicitly said that she didn’t want Sami anywhere near her son. Despite all of this, the judge ended up ruling in Sami’s favor because of Jan Spears’ (Heather Lindell) testimony.

It is confirmed that Allie is finally coming back to Salem and she sure has missed a lot of drama. She will be informed of what happened after she disappeared. Her mother got a restraining order against “Ericole” so she could take the baby from the hospital. Her suing for custody and bringing up all of Nicole’s dirty deeds from the past. Plus, her getting Jan released so she could testify and then unleashing her on Shawn Brady (Brandon Beemer) and Belle Black (Martha Madison).

It is stated that when Allie finds all of this out, she will confront Sami and unleash her fury on her.

Days of Our Lives spoilers reveal that Sami knows with Allie back in Salem, the baby could end up going to Nicole. So, she panics and acts fast in order to keep her grandson. It isn’t revealed what crazy idea she comes up with, but we do know she makes Allie a proposition. Plus, with Sami leaving Salem, will she take the baby with her or go back to EJ DiMera (formerly James Scott) without the newborn?

Days Of Our Lives Spoilers: Hope Suspects Ciara May Be Alive, Feels She Left Her Rings As A Clue #Days #DOOL #DaysOfOurLives https://t.co/DfCqv9HgAJ

Sami’s proposition could be that she won’t fight for custody anymore, but only if the baby does not go to Nicole. Could Allie be so sick and tired of the drama that she agrees to raise her son? If so, that doesn’t mean Nicole won’t be in the picture. Executive producer Ken Corday and head writer Ron Carlivati told Soap Opera Digest that Nicole will be spending a lot of time with Allie after Eric leaves Salem.