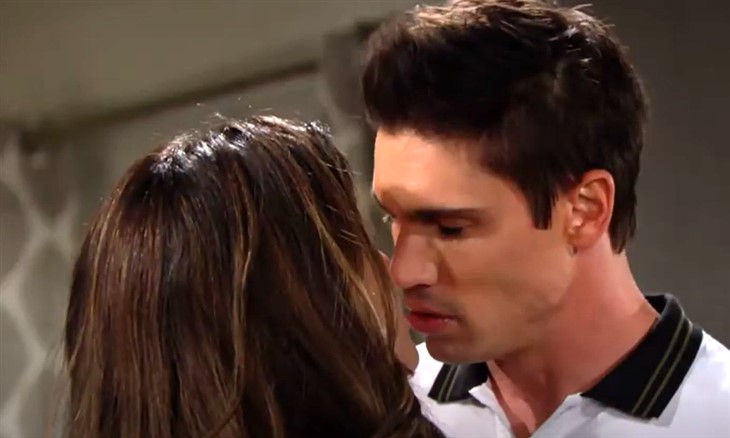 The Bold and the Beautiful spoilers reveal that Dr. John “Finn” Finnegan (Tanner Novlan) and Steffy Forrester (Jacqueline MacInnes Wood) will continue to get closer. In fact, they will kiss this week. Even though they both are developing feelings for one another, they are also surprised by the sudden turn in their relationship. What is going to happen next with “Sinn?”

The Bold And The Beautiful  – Steffy Forrester Opens Up

B&B spoilers reveal that Steffy has always stuffed her feelings down and has pretended to be okay with everything in her life. Even though she wanted Liam Spencer (Scott Clifton) back, she told “Lope” that they belonged together. But the look on her face was clear. It was something that hurt her deeply. She is always sacrificing herself for the benefit of others. Plus, there was her sister’s death and losing “PhoeBeth.” All of the romantic and family drama was bound to have an effect on Steffy at some point.

There is only so much a person can take before the building pressure finally causes an explosion. With Steffy, we aren’t seeing her go into rages as some people would. Instead, she is trying to find a way to numb the pain as those emotions come out, which is leading to her pain pill addiction.

B&B Spoilers – The Doctor Is In

The fact that Finn is getting Steffy to open up is a great step in the right direction. In order to heal from her trauma, she has to admit that it’s there and get it out in the open. Plus, Finn is proving that he is going to be by Steffy’s side as she goes through these troubled waters. That is exactly what she needs… a real man who will stand with her no matter how hard things get.

We are also seeing Finn and Steffy develop a personal relationship and this week, they will share a kiss. Now, they will be surprised by the sudden turn in their relationship. However, it sounds like they will continue getting closer in the next few weeks.

The Bold And The Beautiful Spoilers – Liam Spencer Interferes

The Bold and the Beautiful spoilers reveal that Liam will not approve of Finn and Steffy’s relationship. He thinks that Finn knows “too much” about Steffy’s life. He thinks it’s a “red flag” and sets out to find out what Finn is up to. However, he ends up getting blocked at every turn. Finn won’t discuss anything with Liam, Thomas Forrester (Matthew Atkinson) lashes out at him and Ridge Forrester (Thorsten Kaye) doesn’t see a problem. Then, Hope Logan (Annika Noelle) calls Liam out on his obsession with sabotaging “Sinn.”

B&B Spoilers – The Future of ‘Sinn’

We don’t know very much about Finn yet. Even though he seems like the perfect guy, everyone has their negative traits or a checked history. He is going to have flaws, but what exactly are they? Will they be things that Steffy can accept or will they be a dealbreaker?

Hopefully, she finds that Finn is a lot like her… a perfectly flawed human being deserving of real love.