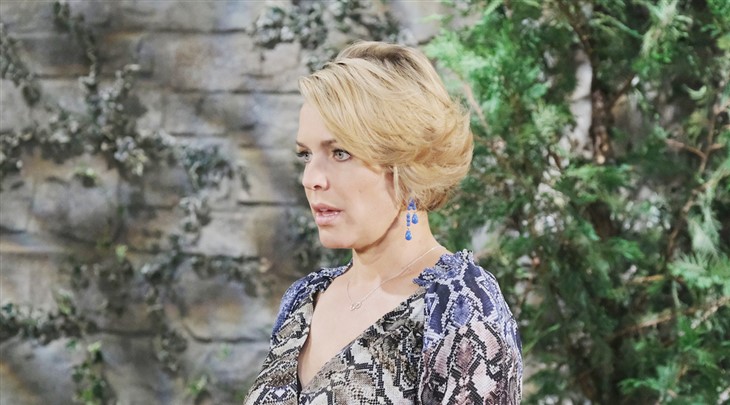 NBC Days of Our Lives spoilers for the week of August 3 reveal that it’s not enough that Nicole Brady (Arianne Zucker) tells Allie Horton (Lindsay Horton) about Sami Brady’s (Alison Sweeney) scheme. Next, she runs to Will Horton (Chandler Massey) and Sonny Kiriakis (Freddie Smith). Saint Nicole won’t stop blabbing her mouth until all of Salem knows about Sami’s secret.

DOOL spoilers reveal that Sami has set the wheels in motion to be sure that instead of Rafe Hernandez (Galen Gering) adopting the baby, it will be Will and Sonny. However, she knows that Allie will never forgive her if the scheme comes to light. Rafe agrees to keep it a secret, but it turns out that someone else knows the truth.

Days Of Our Lives News Updates: How Kristian Alfonso Really Feels About DOOL

It is teased that Nicole knows the truth about Sami being responsible for Rafe not adopting Allie’s baby. Instead of confronting Sami and pushing her to be honest or minding her own business, Nicole can’t wait to stir up more chaos. Knowing that one more incident could destroy Sami’s relationship with Allie forever, she rats out the Salem schemer.

Days Of Our Lives Spoilers – Blabbing to ‘Wilson’

Days of Our Lives spoilers reveal that telling Allie is just not enough for Nicole, even after witnessing the two women get into an explosive fight. She runs off to blab Sami’s secret to Will and Sonny. Of course, she isn’t aware that Will already knows about it, but Sonny does not. So, now Nicole is working on getting the rest of Salem to hate Sami as much as she does.

It is stated that once Sonny finds out the truth, he will lash out at Sami for interfering. While what she did was not right, Nicole went about this in a very sneaky, underhanded, and manipulative way. Especially considering how much she gloated about Allie confiding in her, and not Sami, who is her mother. We have to wonder if Nicole isn’t “doing the noble thing” like she claims, but is really just trying to kick Sami while she’s already down.

Days of Our Lives Spoilers: Captors Turn Ben Back Into the Necktie Killer on Purpose https://t.co/ZtMbSpEclt pic.twitter.com/KUfFoFbTDi

However, when Sonny finds out that Will knew all about Sami’s scheme, could it drive a wedge in his marriage? How will Will justify keeping this secret from his own husband? Will it eventually affect the adoption? We will have to keep watching the NBC soap opera to find out.

The Bold And The Beautiful Promo: Ridge Rages At Bill And Steffy’s Spinal Injuries