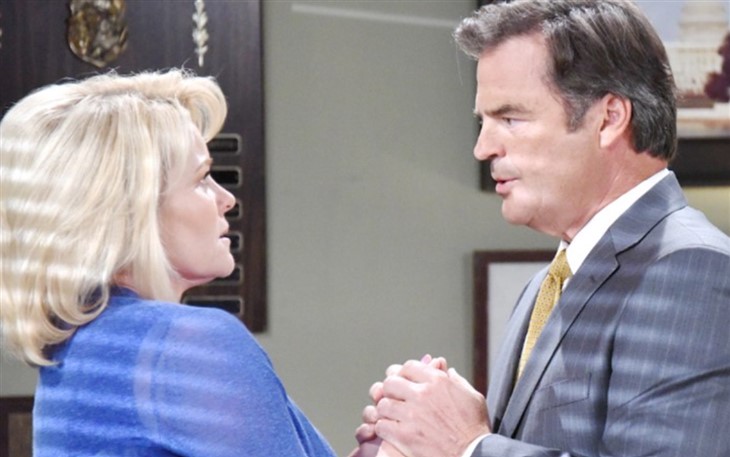 NBC Days of Our Lives spoilers reveal that since Justin Kiriakis (Wally Kurth) has been helping the felon, Bonnie has been getting sweet on him. He seems to be enjoying spending time with her too, which is unexpected considering what she put Adrienne Kiriakis (also Judi Evans) through. Expect her to pull Justin in for a kiss, but how will he react?

DOOL spoilers reveal that Justin had to grieve the death of Adrienne last year. Then, he got close to Dr. Kayla Brady (Mary Beth Evans) and the two began dating. He even proposed to her, but there was speculation it was because he was threatened by Steve “Patch” Johnson (Stephen Nichols). But in the end, Justin would experience a second romantic loss when “Stayla” got back together on the day of Justin’s wedding.

While devastated over losing Kayla, Justin was at Adrienne’s gravesite. Then, Bonnie came out of nowhere and Justin kissed her, thinking she was Adrienne. He wasn’t happy to find out that the woman standing before him was not his beloved wife, but the woman who put her through so much.

Days Of Our Lives Spoilers – Developing An Unlikely Bond

Days of Our Lives spoilers reveal that Bonnie was having trouble with her book publisher. She wasn’t getting her royalties because of some fine print in the contract. She vented to Justin about it and at first, he didn’t care. Then, he took another look and realized that he could help her after all. Now, the two have been spending time together and Bonnie even got him to loosen up and have some fun. It is an unlikely bond and many Salemites don’t understand it.

Days Of Our Lives Spoilers And Recap Wednesday, September 16 – Allie Returns To Salem; John Goes Off On Samihttps://t.co/OQj8l0lz6f

It is teased that during the week of September 21, Bonnie will suddenly pull Justin in for a kiss. How will he react to the surprise smooch? He is lonely and has been enjoying spending time with her, even though he doesn’t want to admit it. But there is also the history of Bonnie and Adrienne.

Can he really move past everything that the lookalike did to his wife? Can he truly find forgiveness and will Bonnie actually be redeemed? Could Justin actually begin a relationship with her? We will have to keep watching the NBC soap opera to see how this story develops.