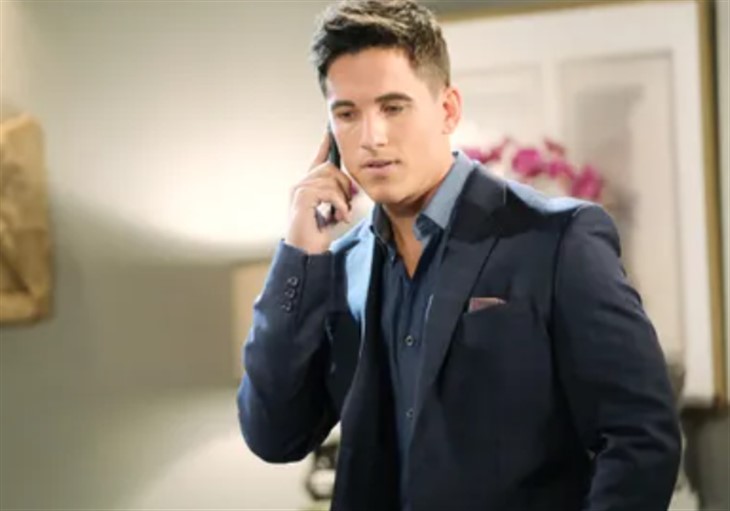 Days of Our Lives spoilers for the week of November 30 reveal that Charlie Dale (Mike C. Manning) will be jealous once again. This time, Claire Brady (Isabel Durant) won’t be kissing another guy. She will simply be talking to Ben Weston (Robert Scott Wilson) and trying to console him. The two became unlikely friends, but Charlie will have a serious problem with that.

DOOL spoilers reveal that Charlie really wanted to ask Claire out on a date, but he was too nervous. When Xander Cook Kiriakis (Paul Telfer) gave the intern a push, Charlie went to Claire’s house. However, he didn’t find his crush alone. She was with her ex-boyfriend, Theo Carver (Cameron Johnson), and was kissing him.

We saw how cold Charlie reacted when Claire surprised him at the Titan office. Eventually, everything came out in the open and Claire explained what happened. Then, the two went out on a date and had a really great time. Unfortunately, it seems that the one big flaw Charlie has is his insane jealousy.

Days of Our Lives spoilers for the week of November 30 reveal that Claire will meet up with Ben. Even though they seem like an unlikely pair, they have developed a friendship… nothing more. Ben is still grieving over Ciara Brady Weston’s (Victoria Konefal) death. Ben and Claire will probably be talking about her death, and she might even console him. However, Charlie will see it and think something completely different. Instead of asking her about it, his rage and jealousy will have him deal with it another way.

It seems that we are seeing a common theme with Charlie. He might be an attentive and caring guy… as long as there are no other males nearby. Inside, he was exploding with fury. On the outside, he treated Claire like crap and wouldn’t tell her why.

At that time, they hadn’t even been out on a single date yet. So, imagine how he’s going to react to Ben now that they are dating. It’s not going to be pretty and perhaps this is the bad side of Charlie that has been teased. Just how far will he go to keep every guy in Salem away from Claire?