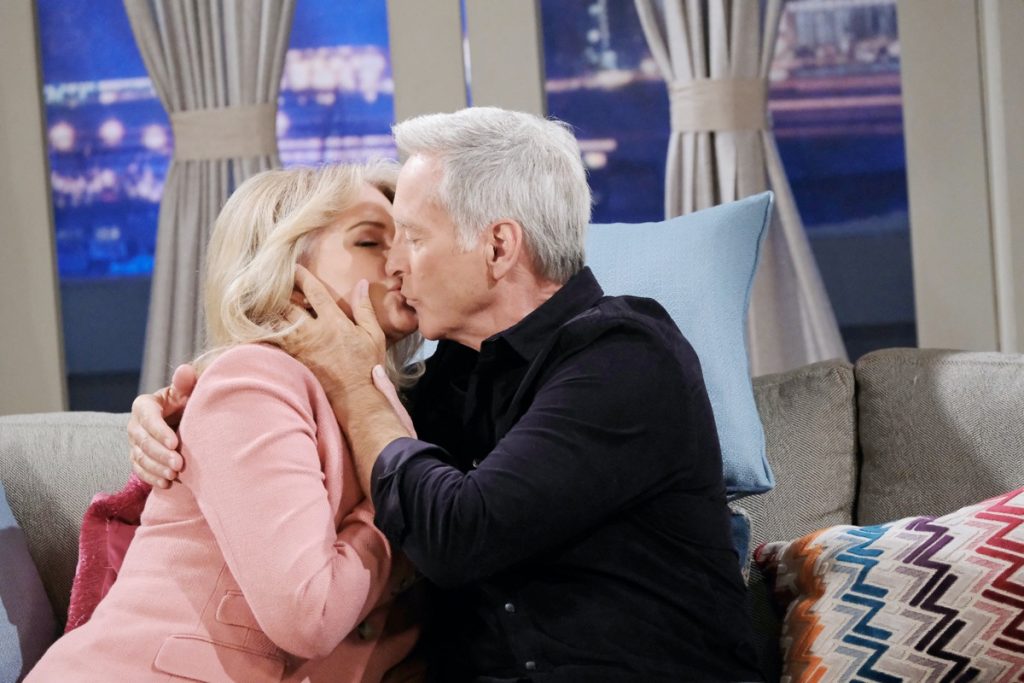 Days of Our Lives spoilers tease that Dr. Marlena Evans (Deidre Hall) and John Black (Drake Hogestyn) are all set to have a romantic Valentine’s Day on an upcoming episode of Days of Our Lives!

Marlena Evans And John Black Certainly Do Have Cause To Celebrate

Marlena and John certainly do have cause to celebrate, having just recently been freed from being kidnapped by Stefano DiMera aka “Steve Johnson” (Stephen Nichols) and Princess Gina Von Amberg aka “Hope Brady” (Kristian Alfonso) recently. The danger is still not completely gone, with Stefano still in the wind, but Hope/Gina is in custody and no longer a threat.

Now just to get her back to being herself! That is a problem a little beyond Marlena’s expertise, since there is more to consider than just a psychiatric disorder. There are a couple of devices that need to be removed from her neck and brain! But for now, they have their condo to themselves, no pressing matters to attend to, and their traditional strawberries and whipped cream ready for their celebration, along with either champagne or maybe wine – and lilacs. Don’t forget Marlena’s favorite flower, lilacs!

The Couple Have Been Through Some Challenges In The Past Year

The couple certainly have been through some challenges in the past year, with Marlena studying abroad and John not realizing Hope was Gina, and letting her stay with him in their condo while she claimed her house was under renovation from a flood in the basement.

Talking among themselves they have realized that “Hope” destroyed all of Marlena’s letters to him, and all of his letters to Marlena as well, and John wonders why he didn’t figure it out sooner, before he was hung from the ceiling in a warehouse in Prague! However, now is not the time for regrets or second-guessing oneself – now is the time to be thankful they are alive, safe, and together!

From disappearances, to kidnappings, to presumed deaths, John and Marlena have certainly had many challenges through their years together! John and Marlena met in 1986. At the time, John was an amnesiac also known as “The Pawn” who was being used by Stefano DiMera and he got his name off of a marker honoring veterans.

However, information (later proved false) suggested that he was really Roman Brady (Josh Taylor), Marlena’s husband who was presumed dead, with extensive plastic surgery to explain the difference in appearance between the old Roman and John Black. John (as Roman) and Marlena were then married until she “died” in a plane crash in 1987. Marlena returned in 1991 and it was revealed that Marlena’s supposed death in the plane crash was not true and Marlena had spent the previous four years in a coma.

Then the real Roman turned up, and that was when it was discovered that John had been programmed with Roman’s memories. Roman and Marlena got back together while John met Isabella Toscano, (Staci Greason) with whom he had Brady Black (Eric Martsolf) while Marlena and Roman had Eric Brady (Greg Vaughan) and Sami Brady (Alison Sweeney), fraternal twins. After Isabella died, Marlena found she still had feelings for John and they had an affair and conceived Belle Black (Martha Madison) and Roman found out, and they divorced. They faced many other challenges and many remarriages between 1986–91, 1999–2005, 2006–08, 2009–12, 2013–14, and the most recent in 2018. It sounds like this one is going to stick, though!