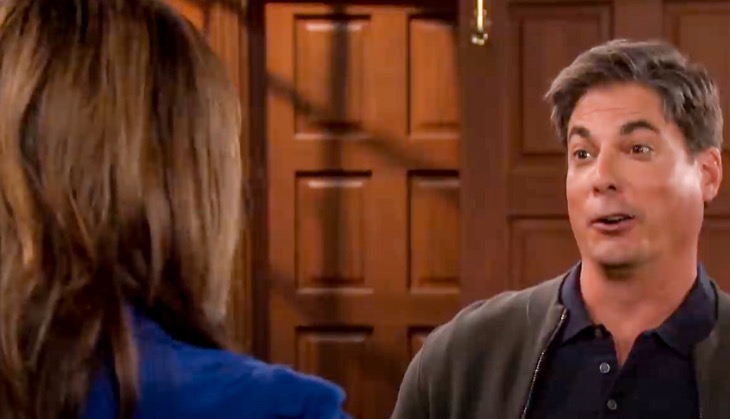 NBC Days of Our Lives spoilers and updates reveal that during the week of June 8, Lucas Horton (Bryan Dattilo) will meet with Kate Roberts DiMera (Lauren Koslow). He has distressing news, which has us thinking he must beg for her help. We know that Allie Horton (Lindsay Arnold) arrives in Salem with a secret, so does she run away from home? When will he learn she’s in her hometown?

DOOL spoilers reveal that next week, Allie arrives in Salem. She unexpectedly shows up at Eric Brady (Greg Vaughan) and Nicole Walker’s (Arianne Zucker) doorstep. She has a huge secret and begs her uncle not to tell anyone, especially her parents.

According to Soaps.com, Lucas will deliver distressing news to Kate. Now, due to the timing, it’s likely that Allie might have gone missing. It would only be natural for Lucas to talk to his mom about it. He could possibly think she might have contacted family in Salem. If that’s what his thought is, he’s on the right track. He’s just asking the wrong relative.

Days of Our Lives spoilers reveal that Allie asks Eric not to tell anyone her secret. The former priest won’t be comfortable with that. He might keep the pregnancy hidden for a little while. But he will most likely encourage her to let her parents, Lucas and Sami Brady (Alison Sweeney) know she is okay. At the very least, they need to know she is safe.

Eventually, Allie won’t be able to hide her secret. It is confirmed in a DOOL summer 2020 preview that she is pregnant. She ends up giving birth, but the end of the video implies that there might be a problem. We just don’t know if it is with the baby if Allie’s life is in danger or both.

It is teased that Allie decides to give the baby to Will Horton (Chander Massey) and Sonny Kiriakis (Freddie Smith). It certainly seems like it is meant to be since right before Allie shows up in Salem, “Wilson” talks about adoption or surrogacy.

What do you think will happen when Allie Horton shows up at Eric and Nicole’s door? Will they keep her secret? Will Lucas ask Kate for help when his daughter goes missing? Will the young woman and her baby be okay? We will have to keep watching the NBC soap opera to find out.

EastEnders Spoilers: Keegan Wants To Leave Walford With Karen – Will He Leave Tiff Behind?