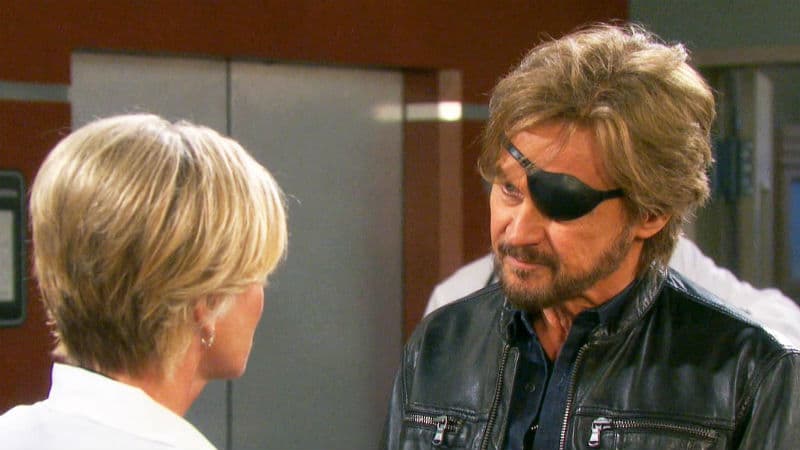 NBC Days of Our Lives spoilers and updates reveal that the day has finally come for Kayla Brady (Mary Beth Evans) to marry Justin Kiriakis (Wally Kurth). However, after a series of events on the day of the ceremony, “Stayla” reunites. So, where does this leave Justin, especially since it’s not Adrienne Kiriakis (Judi Evans), but her lookalike, Bonnie Lockhart?

DOOL spoilers from TV Guide reveal that Steve “Patch” Johnson (Stephen Nichols) plans to leave Salem. He can’t watch the woman he loves to move on with another man anymore. At one point, Steve was going to tell Kayla how he felt. However, he changed his mind after seeing Justin propose to her.

In the upcoming week, expect Steve to make his announcement to John Black (Drake Hogestyn) and Marlena Evans (Deidre Hall).

The new issue of Soap Opera Digest reveals that Bonnie shows up at the cemetery as Justin is visiting Adrienne’s grave. Believing she is his dead wife, Justin quickly embraces the woman and passionately kisses her. However, it turns out that he isn’t kissing Adrienne at all. The woman is actually her lookalike, Bonnie.

Days of Our Lives spoilers reveal that Justin ends up making a huge confession to Kayla. It must be the fact that he kissed Bonnie thinking it was his dead wife. On that same day, Kayla will comfort Steve and have to deal with some sort of crisis. It leads to Kayla needing time to think things through.

It is teased that Kayla will be forced to make a tough decision. She must finally discover that Steve isn’t over her like he previously claimed. He still loves her and once Kayla finds this out, she will have to pick one man. Does she go ahead and marry Justin, or get back together with Steve?

The cover of SOD confirms her choice. Kayla and Steve reunite, which should be a relief to “Stayla” fans. But where does this leave Justin? That we do not know just yet, but there is a word that Steve and Kayla will leave Salem for a bit because they “need a break.” Perhaps this will make it easier for Justin to get over losing his fiancee — and give him time to properly grieve Adrienne. We will have to keep watching the NBC soap opera to see what happens next.