Days of Our Lives spoilers reveal Kyle Lowder was spotted in the spring preview trailer. Will the actor be reprising the role of Rex Brady? If so, then what brings him back to town? Could he decide that his future really is with Sarah Horton (Linsey Godfrey), despite their rocky split? Or will he be coming back to cause problems at her wedding to Xander Cook Kiriakis (Paul Telfer)? 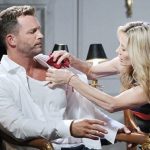 DOOL spoilers reveal that Rex could be coming back after his sudden and emotional exit last summer. In the spring preview clip, Lowder is seen briefly. In the quick scene, he is on the phone talking to someone. Could a Salemite let him know about Sarah’s wedding to Xander?

For a brief time, Rex and Sarah were married, but it quickly ended with heartbreak. Sarah slept with Eric Brady (Greg Vaughan), which ended with her becoming pregnant. However, the truth came out in an unexpected way. While the married couple was in bed together, Sarah blurted out Eric’s name. Understandably, Rex was upset and angry.

In fact, Rex decided to suddenly leave the hospital where he was working as a doctor. But before he left Salem, he promised Sarah that she would regret her decision. Fans got the impression that he could be out to get revenge and Sarah’s wedding could provide him with that opportunity.

Days of Our Lives spoilers reveal that weddings never go as planned in Salem. It is already speculated that the baby swap secret could come out at Sarah’s wedding. However, who will expose the truth? Will it be Dr. Raynor (Victoria Platt), Nicole Walker (Arianne Zucker), or could Rex somehow be part of the storyline?

Fans expected Rex to eventually return, especially since there didn’t seem to be any closure for his storyline. He left suddenly and with some pretty harsh feelings toward Sarah and Eric. Will he be over the betrayal when he comes back? Perhaps he will once again try to win back Sarah? Or is he back for revenge?

Why do you think Rex Brady returns to Salem? Is it because of Sarah Horton’s wedding or does he have another reason for suddenly coming back? Fans will have to keep watching the NBC soap opera to find out.