Days of Our Lives Spoilers: Kristen’s Dreams Are Finally Coming True – Has Both Brady And Rachel At Home 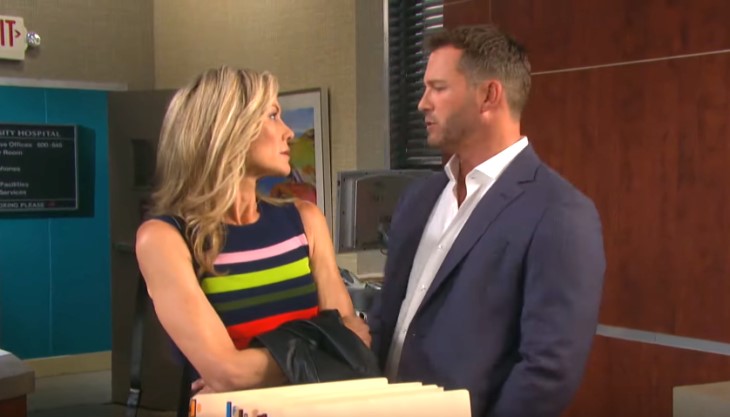 Days of Our Lives Brady Black (Eric Martsolf) and Kristen Dimera (Stacy Haiduk) has certainly had a tumultuous relationship. When Brady found out that Kristen was pregnant with his child, he didn’t even believe her. Now that they have been reunited with their daughter, what is next for the couple?

Days of Our Lives Spoilers – The Truth Has Finally Come Out

Days of Our Lives Mickey Horton (Josephine and Rosalind May) is almost a year old. Mickey just beat cancer due to a bone marrow transplant. Now Mickey’s world is about to be turned upside down when her true identity is revealed. Everyone in Salem is about to learn that Mickey is indeed Rachel Isabella Black, Brady and Kristen’s daughter. This child is about to be taken from the only parents she has ever known and giving to her birth parents. Now that Brady and Kristen have their miracle child, what comes next?

When Days of Our Lives Brady first found out about his daughter, he was stunned. Brady planned to take his child and send Kristen to prison for her past crimes. Brady wanted his child and nothing more. However, throughout her pregnancy, Kristen changed. Brady began to fall in love with Kristen again. However, after their daughter’s death, Kristen disappeared. Now that Brady has her back, should he make this arrangement permanent? Is Brady ready to marry Kristen?

Days of Our Lives Spoilers – Rachel Black Deserves Her Family

Days of Our Lives Rachel deserves to have her family together after being reunited with her parents after all this time. Brady loves Kristen and she feels the same. Rachel has been with other people her entire life. Brady and Kristen both need time to bond with their daughter. Should Brady and Kristen make their relationship, and their family permanent? Is it time to finally get married and move on as a couple with their child? Is it time to think about giving Rachel a sibling even?

Days of Our Lives Kristen has done some very underhanded and even sometimes evil things in her past. Unfortunately, most of her victims have been Brady’s family. Will the family be willing to let bygones be bygones and accept Kristen for her daughter’s sake? Can everyone get past all the hurt and pain that Kristen has caused them? Can they accept Kristen in Brady and Rachel’s lives?

Days of Our Lives Spoilers: Nicole Reveals The Devastating Truth About Mackenzie To Eric https://t.co/WOfRUh3FIa pic.twitter.com/M3j2zkEgy3

Brady has tried to get his family to accept Kristen. Brady knows Kristen has changed and wants everyone else to realize that as well. Can Brady and Kristen make is at a married couple? Should the two of them get married and give their daughter the family she deserves?

The Young and the Restless Spoilers: Adam Is Determined To Get His Revenge On Victor – But Will His Plan Backfire?